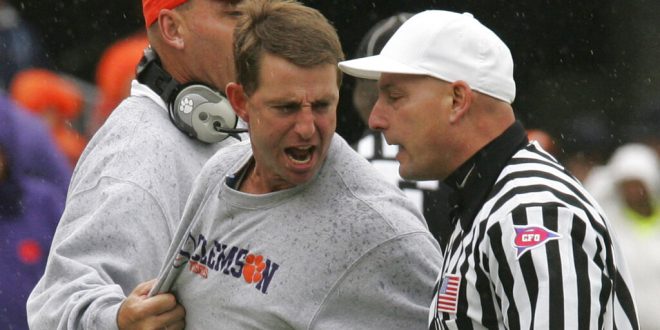 FILE - In this Oct. 17, 2009, file photo, Clemson coach Dabo Swinney, center, is restrained by assistant coach Danny Pearman as he yells at referee Jerry Magallanes during the first half of the team's NCAA college football game against Wake Forest in Clemson, S.C. Pearman said he made a “grave mistake” when he repeated a racial slur to ex-Tigers tight end D.J. Greenlee at practice three years ago. The incident came to light Tuesday, June 2, 2020, when former player Kanyon Tuttle posted about it on social media. Tuttle was responding to the school's post of Swinney's comments Monday about the death of George Floyd in Minneapolis last week. (AP Photo/Mary Ann Chastain, File)

Black Lives Matter protests are in full focus on account of issues regarding racism in America. For the same reason, Clemson head football coach Dabo Swinney found himself in hot water.

Swinney came under fire as a result of how he handled a situation where a member of his coaching staff allegedly used a racial slur. Previously on June 2, former Clemson receiver Kanyon Tuttle called out Swinney on Twitter for allowing a coach to utter an alleged racial slur to a player.

Cap, you allowed a coach to call a player the N-word during practice with no repercussions. Not even a team apology. When we had the sit-in in front of sikes you suggested us players try to stay out of it to limit distractions. Stop protecting your brand, take a stand https://t.co/7gznXmyniI

Although it is just surfacing now, the incident in question took place in 2017. Former Clemson tight end D.J. Greenlee allegedly uttered the racial slur while blocking another player during practice. According to Swinney, assistant coach Danny Pearman repeated the same phrase while correcting Greenlee.

“I would fire a coach immediately if he called a player an N-word,” Swinney said. “That did not happen.”

Greenlee agreed that Pearman did not call him the N-word. Last week, Pearman apologized for using the racial slur. Furthermore, Swinney defended Pearman while reprimanding the use of the N-word.

“There’s no excuse for even saying that,” Swinney said. “But there is a big difference. He did not call someone an N-word.”

John C. Calhoun served as vice president of the United States, and also owned slaves. The Clemson campus stands on the same ground as Calhoun’s Fort Hill Plantation. As a result, the school’s honors college includes the name Calhoun at the front.

In response, former Clemson players Deshaun Watson and Deandre Hopkins petitioned to rename the Calhoun Honors College. Hopkins stated that Calhoun’s influence on the school kept him from bringing up Clemson in his introductions before NFL games.

The responses of Watson and Hopkins align with Swinney’s statement regarding his support for his players against racism.