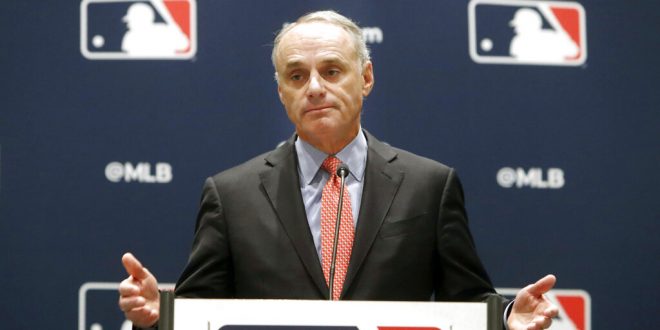 FILE - In this Nov. 21, 2019, file photo, baseball commissioner Rob Manfred speaks to the media at the owners meeting in Arlington, Texas. Major League Baseball rejected the players' offer for a 114-game regular season in the pandemic-delayed season with no additional salary cuts and told the union it did not plan to make a counterproposal, a person familiar with the negotiations told The Associated Press. The person spoke on condition of anonymity Wednesday, June 3, 2020, because no statements were authorized.(AP Photo/LM Otero, File)

MLB still at a standstill on when to start the season

It feels like a lifetime ago since there was baseball on our screens. Well that’s because the last game of the MLB season was in October of 2019. Opening Day was scheduled for March, but due to the outbreak of coronavirus, the season was postponed. Nearly three months have passed and some sports are beginning to make the journey back–but not baseball. Is there a plan in place? Will there even be baseball in 2020? Fans are anxious for answers.

MLB has a  new proposal

The new plan put forth by Major League Baseball offered higher potential salary than previous plans but less games. The new proposal offered on Monday would give players 75% of their original projected salaries for the season. But they are only playing  a 76-game season. Another thing unique about this plan has to do with postseason. Since the fear of a second-wave coronavirus outbreak is still prevalent, MLB wants to end the Word Series no later than the end of October. Additionally, the playoffs could see eight teams per league partaking.

The MLBPA has not rejected the plan, but they have labeled it a “step-backwards.” They feel that the players could take a huge financial risk.  MLB even included the ability to waive draft-pick compensation for free agents. Thus, teams would not need to offer qualifying amounts for free agents. And the latest proposal allows players who are at risk for COVID-19 to opt out of the season with pay and service time.

Despite fans being skeptical of whether players will take the field this year, MLB Commissioner Rob Manfred is certain baseball will happen. He is highly hopeful that MLB and the Player’s Association will come to agreement, regardless of the contention currently.

The main issue to be resolved is that they Player’s Association wants 100% of their salaries based on a deal made in March. But owners have stated that the reality of not hosting a packed stadium and playing less games just produces less revenue than a normal season.

Another proposal will be made aiming to find middle-ground between both parties.

Sound used in this story courtesy of ABC Newscall/ESPN