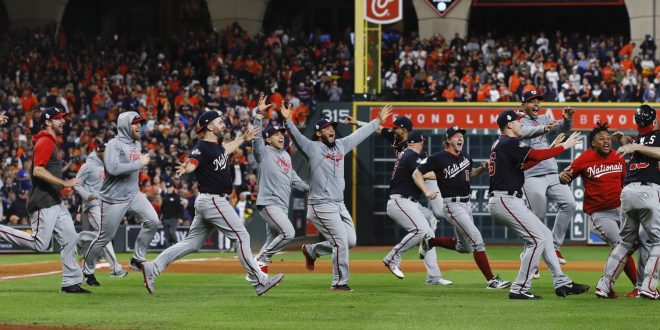 The Washington Nationals celebrate after Game 7 of the baseball World Series against the Houston Astros Wednesday, Oct. 30, 2019, in Houston. The Nationals won 6-2 to win the series. (AP Photo/Matt Slocum)

After weeks and weeks of back-and-forth, it looks like there will be baseball. Both sides were able to come to an agreement and a re-modified 2020 baseball season is underway. What’s this new season going to look like? Will all the players return? When will the first pitch be on our screens? And what does this mean for Minor League ball?

The workouts will be nothing different than the ones in February. Practices will be staggered with pitchers, hitters, and fielders operating at different times. Players will get temperature checks daily. Any player with over 100.4 F will be sent home. After a few weeks of practicing, teams will play local exhibitions games before starting the season.

Some teams are realizing the seriousness of the virus, with the Philadelphia Phillies shutting down their camp temporarily. Teams are making the safety of the players, coaches, and staff their number one priority. Los Angeles Dodger Jerry Hairston Jr. noted that baseball not only has a high likelihood of starting the season but also finishing it.

Along with the shortened season, several changes will be implemented. The National League will include a designated hitter. Relief pitchers must face a minimum of three batters (unless the inning ends). Players can no longer spit or carry a wet rag with them to decrease the spread of coronavirus. In the event of extra innings, each team will start with a runner on second base. Other notable adoptions include the extension of the trade deadline to August first and the 30-man roster accompanied by the 60-man player pool.

Here’s what you need to know about the 2020 MLB season: pic.twitter.com/al593RTEPa

Some players have already notified fans that they will be stepping away from this unique season. Ryan Zimmerman and Joe Ross of the reining 2019 World Series Champion, Washington Nationals, will not be participating in the 2020 season.

It came as no surprise to fans that the MiLB will not play out this year. While it may not seem like a huge deal, many prospects saw this year as the season where they might get the call up to the pros. There are plans for a prospect/developmental league this year, nothing is set in stone.

Jayson Stark, who covers MLB for the Athletic, caught up with Steve Russell yesterday on Sportscene to discuss some of the effects that minor leaguers are going through.

Even with the expanded MLB rosters, many hopefuls won’t see live baseball until February of next year. One thing is for sure, baseball and sports, in general, will never look the same as they have before.