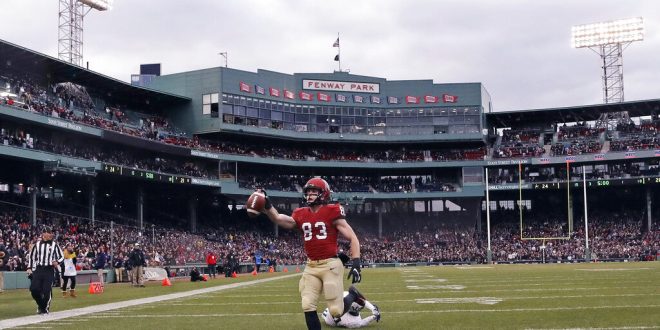 FILE - In this Nov. 17, 2018, file photo, Harvard wide receiver Jack Cook (83) raises the ball after crossing the goal line for a touchdown against Yale during the second half of an NCAA college football game at Fenway Park in Boston. The Ivy League has canceled all fall sports because of the coronavirus pandemic. (AP Photo/Charles Krupa, File)

Yes, even football. The Ivy League announced it won’t be playing any sports in the fall. They have yet to make a decision on winter and spring sports. The Ivy League said as well it will no consider bringing back sports until Jan. 1.

ESPN senior writer Heather Dinich said the Ivy League’s decision was based on campus policy. The schools in the Ivy League have made their decision for campus policies for the fall, and it made it “impractical” to have sports. The social distancing protocols for students, faculty and staff do not no include exemptions for athletes and coaches.

These protocols involve simply staying away from campus. Harvard, for example, is having 100 percent of its classes online this fall. Some students will be allowed to live on campus for a bit, but they must move out, come Thanksgiving time.

It’s not out of the realm of possibility. The Ivy League was the first to cancel its basketball tournament. It was met with criticism, but everyone else followed suit by the end of the week. Dinich said she thinks that other conferences are less likely to follow this time around. Some might, but it’s less likely.

It is true that some conferences might not have the financial backing to not have sports in the fall. College football in itself is a major moneymaker for schools. For many schools, it pays the bills.

Even if college football is played, will it start on time? Paul Finebaum does not think so. He thinks there can be college football. However, that doesn’t mean the coronavirus will allow it go as planned.

Finebaum added that moving the season to the spring is still considered a last resort. He does think that university presidents are watching the decisions made by the Ivy League, and it could impact their decision making. After all, it’s hard to argue a decision made by schools like Harvard and Yale at times. The upcoming weeks will be crucial to the future of the 2020 fall sports season.

Harrison is a sports coordinator at ESPN 98.1 FM/850 AM WRUF. He served as a beat writer for Florida Gators football for the 2019 and 2020 seasons. He also contributes to WRUF's Gainesville Sports Center segments and makes appearances on the Clash on Harp on Sports. Harrison has been a content writer for WRUF since January 2019 as well.
@HarrisonSmaj
Previous Mark Calcavecchia Talks Career
Next Joel Embiid Returning to Play