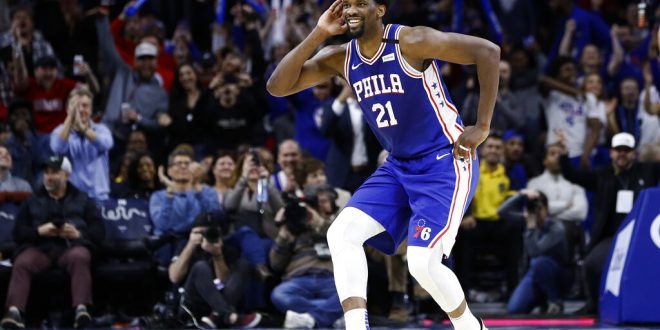 FILE - In this Feb. 24, 2020, file photo, Philadelphia 76ers' Joel Embiid celebrates after a three-point basket during the second half of an NBA basketball game against the Atlanta Hawks in Philadelphia. 76ers coach Brett Brown says All-Stars Ben Simmons and Joel Embiid are healthy for the NBA restart. (AP Photo/Matt Slocum, File)

Despite his concerns, Philadelphia 76ers Center Joel Embiid will return to play in Orlando. This decision came as he made a very mixed stance on the idea of returning.

Embiid’s Career at a Glance

Originally from Cameroon, Embiid was discovered at a basketball camp by NBA player Luc Richard Mbah a Moute. Mbah a Moute saw the talent in Embiid. For his junior year of high school, Embiid moved to America to pursue his career in pro basketball. He played one season at Montverde Academy in Florida before transferring to The Rock here in Gainesville.

Embiid committed to the University of Kansas and played there for a year before going to the NBA Draft. The 76ers drafted him third overall as part of “the process.” Embiid appeared on the NBA all-rookie team and has appeared in three consecutive all-star games.

While most have let Embiid’s comments go, it has faced some criticism.  Former NBA player Kendrick Perkins criticized him on ESPN, saying his primary focus should be playing ball.

NBA Flights have touchdown in Orlando…Check ball and let’s hoop got Damn it!!! pic.twitter.com/XiWaCyvbk3

However, other outlets have shown supports for Embiid’s comments. Noah Levick of NBC Sports Philadelphia said while Perkins has the right to criticize Embiid, his comments are “lacking in empathy and perspective.”

Embiid will be returning with the 76ers regardless. However, it will be some time before we see if his fears come true.

Harrison is a sports coordinator at ESPN 98.1 FM/850 AM WRUF. He served as a beat writer for Florida Gators football for the 2019 and 2020 seasons. He also contributes to WRUF's Gainesville Sports Center segments and makes appearances on the Clash on Harp on Sports. Harrison has been a content writer for WRUF since January 2019 as well.
@HarrisonSmaj
Previous Ivy League Says No Sports in Fall
Next Stanford cuts 11 sports programs