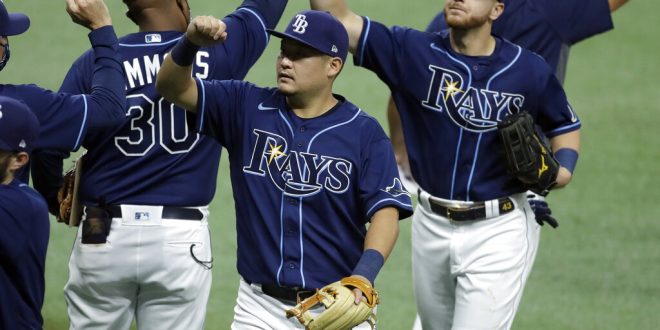 Solid pitching and timely hitting won another game for the Tampa Bay Rays, as they beat the Atlanta Braves Tuesday night 5-2. That win gives the Rays their fourth in a row since dropping Opening Day.

Chirinos pitched four innings in his season debut. His only rough inning was the third inning, where he gave up a run, a walk and two hits. The run was unearned, as Ender Inciarte reached on an error by Ji-Man Choi. Despite not qualifying for the win, Chirinos finished the night with no earned runs and four strikeouts.

Rays Take the Lead and Keep It

The Rays have made two-out rallies their thing early on this season. Through the first 2 2/3 innings, Braves starter Kyle Wright appeared untouchable. In the bottom of the third with two outs, Kevin Kiermaier stole second to start the rally. Brandon Lowe and Yandy Diaz walked back to back to load the bases.

Yoshi Tsutsugo stepped up to the plate and slapped a base hit to right field, scoring Kiermaier and Lowe to make it 2-1 Rays. Jose Martinez followed that up with an RBI single to left to make it 3-1. Joey Wendle found a hole to get a base hit up the middle that scored Martinez.

After that, Wright was done for the night. Josh Tomlin came into relieve Wright. But he too could not stop the bleeding. Tomlin threw a wild pitch that allowed Martinez to score and make it 5-1.

The Braves tried to make it interesting in the seventh, but could only muster a single run. Chaz Roe pitched a scoreless eighth, and Oliver Drake slammed the door in the ninth to end the night.

A bad pitch to Cavan Biggio is the difference between the Rays’ current record and being undefeated. In each game, Tampa Bay scored at least four runs or more. Against the Braves, they were seven for 11 with runners in scoring position. Remove Charlie Morton, and the pitching staff owns a 1.93 ERA through five games (2.93 with Morton). This translated to a series win over the Blue Jays and the Braves.

The Rays hit the road for the first time this season when they follow the Braves back to Atlanta for two games. Charlie Morton will get his second start of the season Wednesday night. First pitch is at 7:10 p.m. and will be carried on WRUF starting at 6:30 p.m.

Ryan Yarbough will pitch on Thursday to finish off the season series with the Braves.

Then, the Rays head to Baltimore to play the Orioles for three games before heading back to the Trop to host the Boston Red Sox and New York Yankees.

Harrison is a sports coordinator at ESPN 98.1 FM/850 AM WRUF. He served as a beat writer for Florida Gators football for the 2019 and 2020 seasons. He also contributes to WRUF's Gainesville Sports Center segments and makes appearances on the Clash on Harp on Sports. Harrison has been a content writer for WRUF since January 2019 as well.
@HarrisonSmaj
Previous Bubble success promising as NBA restart approaches
Next Miami Marlins Shut Down Until Sunday