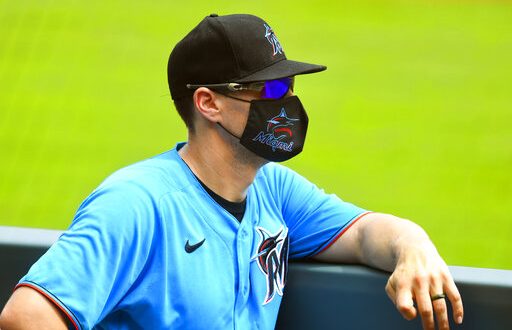 Miami Marlins catcher Ryan Lavarnway watches from the dugout during the first inning of an exhibition baseball game against the Atlanta Braves, Wednesday, July 22, 2020, in Atlanta. (AP Photo/John Amis)

Miami Marlins Shut Down Until Sunday

The already-shortened baseball schedule received another hit for the Miami Marlins. A coronavirus outbreak among the team forced them to postpone their games until Sunday.

Eleven players and two coaches had previously tested positive for the virus. Over the last week, the Marlins have reached 17 positive cases.

Before the game against the Phillies, starting pitcher José Ureña tested positive for COVID-19. But Marlins shortstop Miguel Rojas said that the team decided via a group chat to still play.

MLB reporter Jessica Mendoza explained why letting the players decide might have been a mistake:

After their game against the Phillies, the Marlins stayed in Philadelphia to get extra testing.

Marlins’ CEO Derek Jeter announced that the team is now getting tested daily, and they have enhanced their health protocols for when they travel.

This outbreak forced the Marlins to postpone their home opener against the Orioles and the Nationals’ series in Miami over the weekend. The league was also forced to postpone the series between the Yankees and the Phillies as an extra precaution.

What does this mean for Miami’s season?

Postponing two series is damaging for a season that was already significantly shorter than normal. In a 60-game season, every game counts.

“There are points in their schedule where they can make up that three-game series against the Nationals, possibly. But the four games that they’re going to be missing against the Baltimore Orioles? They don’t have enough off days to do that. Let alone to string two series together like this,” MLB reporter Jeff Passan said.

What does this mean for MLB?

It is very likely the Marlins and possibly the Orioles will not be able to reach 60 games. If more teams start testing positive and postponing games, more teams will struggle to reach the 60 games.

Because of that, the league has to carefully decide their next steps.

Not only would more teams struggle to reach 60 games, their health and safety would also be compromised — more than it already was when they decided to restart the season.

MLB commissioner Rob Manfred said that the decision of shutting down a team or a league will be made depending on the circumstances.

“I think that a team losing a number of players that rendered it completely non-competitive would be an issue that we would have to address and have to think about making a change, whether that was shutting down a part of the season, the whole season, that depends,” Manfred said.

The uncertainty on whether or not leagues or teams would be shut down due to a coronavirus outbreak makes it seem like the league was not well-prepared for this scenario.

Mendoza said that she “expected more” from Manfred when giving direction once an outbreak like this happened.

Passan believes that they should use this situation to figure out how to handle an outbreak, as more outbreaks would not be unusual.

Camila is a senior at the University of Florida, who served as a beat writer for the women's basketball team from 2019 until the 2021 season. She was also a beat writer for the Gators football team during the 2020 season. Camila is also WUFT's news director as well as a sports reporter/anchor.
@CamilaMaffuz
Previous Rays Beat Braves to Finish Home Stand
Next The NFL will be back this season, some players will not