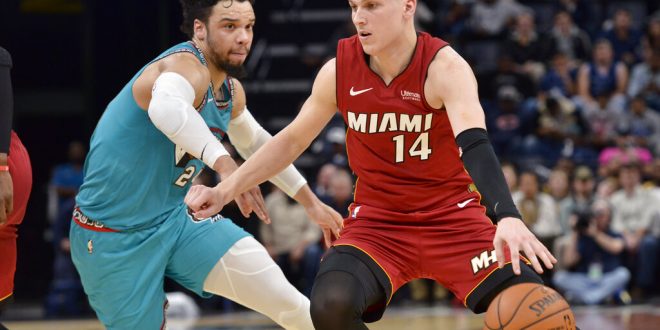 FILE - In this Dec. 16, 2019, file photo, Miami Heat guard Tyler Herro (14) handles the ball against Memphis Grizzlies guard Dillon Brooks in the first half of an NBA basketball game in Memphis, Tenn. Forget dealing with a rookie wall or stumbling into the playoffs exhausted and banged-up. The NBA's break for the coronavirus pandemic gave rookies an offseason within a season. They have had the chance to heal up, study lots of film and gain some much-needed pounds to better handle the grueling season in a league filled with savvy veterans. (AP Photo/Brandon Dill, File)

One word comes to mind when considering the NBA’s bubble at Walt Disney World in Orlando: successful. There have been very few positive coronavirus tests. As a result, the regular season resumes soon.

According to ESPN’s Adrian Wojnarowski, the NBA feels as if it got it right early by implementing the bubble. Philadelphia 76ers coach Brett Brown agrees with that statement.

While the nation struggled with the coronavirus pandemic, the NBA knew that it had to play without fans at games. The league formed its bubble idea with this in mind.

“There was no point flying the players city to city if there were not going to be fans in arenas,” Wojnarowski said. “There was no reason to take that risk. It was kind of the baseline for the belief of the bubble.”

When Major League Baseball presented its bubble idea, the players quickly rejected it. However, the relationship between the NBA and its players seems stronger.

“It’s far different than what you’ve seen in baseball,” Wojnarowski said. “I think it’s at the root of the NBA’s ability to put a bubble together.”

Brown receives temperature checks, oxygen tests, and mouth and nasal swabs every day in the NBA bubble. He praised the safety, efficiency and feeling of the bubble environment.

“I think we have the resources. I think that we have the environment,” Brown said. ” And I think the NBA and Adam Silver deserve a lot of credit.”

Opening night of the NBA restart is on Thursday, July 30. To begin with, the Utah Jazz and New Orleans Pelicans square off at 6:30 p.m. Later that night, the battle of Los Angeles comes to Orlando with the Lakers and Clippers battling at 9 p.m.

Then, the Orlando Magic make their return against the Brooklyn Nets at 2:30 p.m. on Friday. The Magic will benefit from the return of Jonathan Isaac, who previously had a left knee injury.

At last, the Miami Heat will resume their regular season on Saturday against the Denver Nuggets at 1 p.m. At the present time, the Heat and Magic are both in a position to make the playoffs.