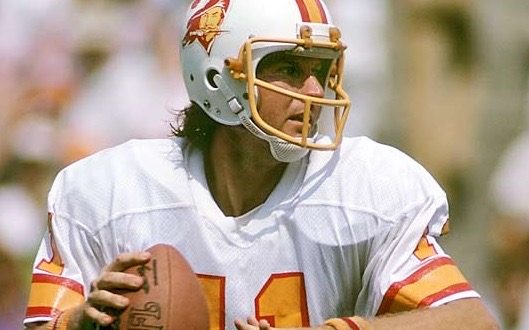 “We are thrilled to be Gainesville’s home for the Bucs,” Seth Harp, WRUF Operations Coordinator, said. “With the additions of Tom Brady and Rob Gronkowski the pewter and red are back, and we couldn’t be more excited about this partnership.”

Should a Bucs game and Gator game conflict, the Gators would air first. Upon completion of the Gators game, the Bucs game would join WRUF in progress.

In the Bucs inaugural season in 1976, Spurrier played in all 14 games. This also means he road out all 14 losses of the 14-game season. At the end of the season, Spurrier received the MVP award from the Buccaneer Booster Club.

In his one season with the Bucs, Spurrier had a completion percentage of 50.2. He threw seven touchdown passes along with 12 interceptions and 1628 passing yards.

Before he was cut in 1977, Spurrier had a chance to practice with QB coach Bill Nelson. Nelson taught Spurrier a lot of the fundamentals that he would take into his own coaching career following his time in Tampa Bay. He broke down the specific things he learned from Nelson during that time.

Spurrier said since Tampa Bay is one of his old teams, he will be “pulling for them every game.”

Harrison is a sports coordinator at ESPN 98.1 FM/850 AM WRUF. He served as a beat writer for Florida Gators football for the 2019 and 2020 seasons. He also contributes to WRUF's Gainesville Sports Center segments and makes appearances on the Clash on Harp on Sports. Harrison has been a content writer for WRUF since January 2019 as well.
@HarrisonSmaj
Previous Issues That Remain in College Sports
Next Big 12 announces they are moving ahead with football