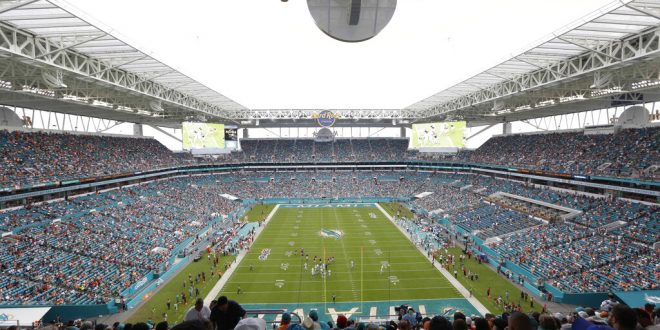 FILE - In this Sunday, Sept. 25, 2016 file photo, Hard Rock Stadium is seen during the second half of an NFL football game between the Miami Dolphins and the Cleveland Browns, in Miami Gardens, Fla. The Miami Dolphins NFL football team has decided to allow up to 13,000 socially distancing fans to attend their home opener against the Buffalo Bills on Sept 20, with the approval of state and local political leaders. (AP Photo/Lynne Sladky, File)

Cue the infamous phrase “what could possibly go wrong?” Both the Miami Dolphins and Miami Hurricanes will allow spectators to attend their home openers.

According to the Associated Press, the plan is to allow up to 13,000 fans. This is about 20 percent of the max capacity at Hard Rock Stadium.

Vice chairman, president and CEO of the Dolphins Tom Garfinkel said seating will be arranged in pods of two, four and six seats, with a distance of at least six feet between each pod, per WPTV.

Hard Rock Stadium will not allow tailgating and will stop alcohol sales after halftime. In addition, everyone inside the stadium must wear a mask/face covering. Garfinkel said if you do not want to wear a mask, then do not go to games.

“There’s been a lot of stress and angst over these last many months. It’s been a difficult time for a lot of people,” DeSantis said. “Having something to look forward to does give people a bit of hope.”

The Attendance Status Around the League

Fifteen of the 32 teams in the NFL have ruled out having fans this season for at least the first few games. Eight teams, including the Dolphins, are going to try, while the rest have no plans.

The Dolphins are the second Florida NFL team to announce they will allow any fans this season. The Jacksonville Jaguars reported back in July they would allow an attendance of 25 percent capacity. Meanwhile, the Tampa Bay Buccaneers have yet to announce anything.

While Miami is allowing limited fans in 2020, Florida has yet to announce its plans. However, other SEC schools have announced plans. According to CBS Sports, Alabama, Auburn, Georgia, Arkansas, Missouri, South Carolina, Tennessee and Texas A&M all officially announced attendance restrictions between 20 and 25 percent capacity.

While nothing was officially released by these schools, an executive order in Mississippi caps attendance at 25 percent and prohibits tailgating. Therefore, this will be the bare minimum restriction for Ole Miss and Mississippi State. South Carolina will be restricting tailgating as well.

Kentucky expects to have a limited crowd this year. Vanderbilt plans to announce its plan soon. LSU, while having no official plan, is likely to discourage those without tickets not to come.

Harrison is a sports coordinator at ESPN 98.1 FM/850 AM WRUF. He served as a beat writer for Florida Gators football for the 2019 and 2020 seasons. He also contributes to WRUF's Gainesville Sports Center segments and makes appearances on the Clash on Harp on Sports. Harrison has been a content writer for WRUF since January 2019 as well.
@HarrisonSmaj
Previous Heat Sweep as Magic Fall Again
Next Florida Sports Roundup