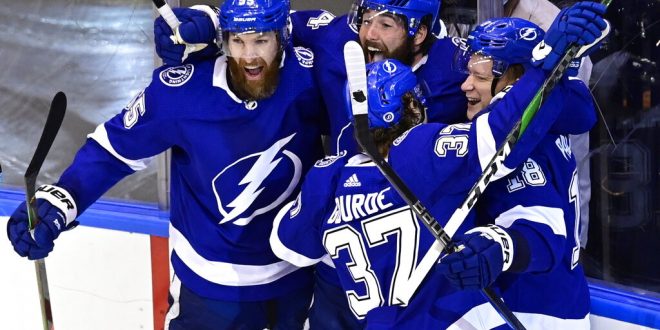 Wednesday is a busy day for Florida professional sports. There are five teams in action across four different sports. In addition, several teams played on Tuesday.

Yesterday, the Tampa Bay Rays (20-11) beat the Baltimore Orioles with a solid pitching performance by Tyler Glasnow. Then, the Miami Marlins (14-11) took both games of a doubleheader against the New York Mets. To clarify, the second game of the doubleheader was a makeup game from a previous series.

Therefore, the Rays and Marlins can each win their series tonight. Tampa Bay hosts the O’s at 6:40 p.m., while Miami visits the Mets at 7:10 p.m.

Ondrej Palat scored the game-winner in overtime to give the Tampa Bay Lightning a 4-3 win over the Boston Bruins. Tampa Bay is 4-0 in OT this postseason.

This result tied the series at one game apiece. Blake Coleman netted two goals and Nikita Kucherov also scored for the Lightning.  Meanwhile, Brad Marchand scored twice for the Bruins; his second goal evened the score late in the third period and sent the game to OT.

After a thrilling, see-saw battle in Game 2, the Lightning look to take a 2-1 series lead in Game 3 tonight at 8 p.m.

Florida basketball teams on opposite ends of the spectrum

In the NBA, the two Florida teams could not be in more different situations.

The Orlando Magic are on the brink of elimination. After beating the Bucks in Game 1, Orlando trails Milwaukee 3-1 in the series.

Orlando will try to avoid elimination at 4 p.m. today. Milwaukee Bucks coach Mike Budenholzer explained what he expects to see from the Magic in this one.

On the other hand, the Miami Heat completed the sweep of the Indiana Pacers on Monday. If the Bucks can close out the Magic today, then Miami will face Milwaukee in the next round.

Orlando City looks to get back on track

Orlando City SC came within one game of winning its first-ever trophy in the MLS. Since then, they lost to Inter Miami as the regular season resumed.

Tonight, the Lions play Nashville SC at 7:30 p.m. This is the first meeting between the two squads, as it is Nashville’s inaugural season.