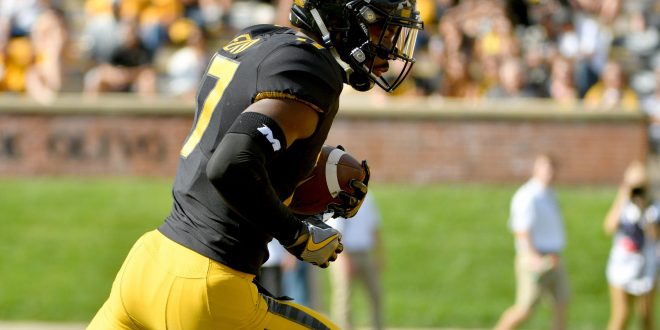 After finishing the 2019 season with a 6-6 record (3-5 SEC), the Missouri Tigers look to compete for one of the top spots in the SEC East. However, with a rough schedule ahead of them, the odds are not in their favor. Gabe DeArmond from Power Mizzou joined Sports Scene with Steve Russell to discuss the future of Missouri football.

DeArmond’s reasoning for Missouri’s losing record is completely justifiable. College football schedule makers were not kind when fixing the matchups for the Tigers.

The Alabama Crimson Tide roll into Faurot Field to kickoff Mizzou’s home-opener on Sept. 26, followed up with playing the Tennessee Volunteers in Knoxville, LSU in Death Valley and Florida Gators in the Swamp all in the month of October. While the Tigers endure this tough four-game stretch to begin their season, DeArmond predicts Missouri to finish 3-7 overall with favorable wins over Arkansas and Vanderbilt.

Missouri enters the season losing a number of key players due to graduating out of the program or to the NFL Draft. Tight End Albert Okwuegbunam, DL Jordan Elliott and OL Trystan Colon-Castillo took their talents to the NFL, while other crucial assets such as OL Yasir Durant, QB Kelly Bryant, WRs Jonathan Nance and Johnathon Johnson and LB Cale Garrett are gone. The team has a huge struggle in the trenches as the offensive and defensive lines become large areas of concern.

During his interview, Gabe DeArmond states that capacity at Faurot Field will be at 25 percent or below. Tickets will be sold by donor rank and there will be a limit on how many tickets each person can acquire. As far as tailgating goes, the University is in the process of making a safe protocol to accommodate other game day regulations.

Although DeArmond is skeptical about the college football season finishing, he believes Mizzou football can make the most out of the games they do compete in. Amidst the COVID-19 pandemic, college football fanatics are ecstatic that SEC football is back for an adjusted 2020 season.

Angel is a student at the University of Florida. She is a Multimedia Journalist who is currently a Sports Reporter and Writer at ESPN Gainesville. Follow her on Twitter (@angelcwells) and Instagram (@angel_wells). Be sure to follow her NFL Twitter account to stay up to date with the latest NFL news. (@UpToDate1NFL)
@angelcwells
Previous Gardner Minshew Prepares for his Sophomore Season as the Jacksonville Jaguars’ Starting Quarterback
Next UF President Fuchs Talks Gator Athletics and First Day of Classes