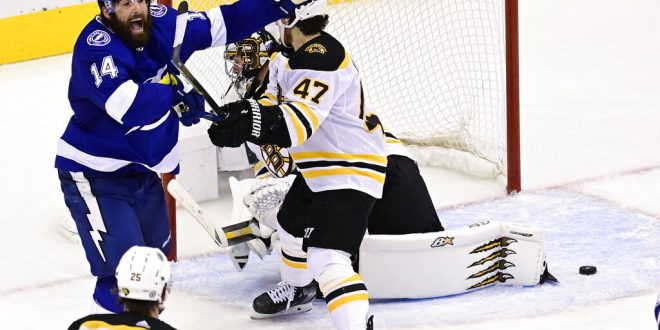 Victor Hedman received a pass from Brayden Point, evaded a defender and then guided the puck past Boston Bruins netminder Jaroslav Halak with 5:50 left in the second overtime. Pat Maroon emphatically shot his fist into the air. The Tampa Bay Lightning eliminated the Bruins in five games with Monday’s 3-2 double overtime win.

Tampa Bay improved to 5-0 in overtime games during this postseason. They move on to their fourth Eastern Conference finals in the last six seasons.

With less than three minutes left in the third period, the Bruins dramatically tied Game 5. David Krejci evened the score at two after Anthony Cirelli established a 2-1 lead for Tampa Bay.

However, the Bruins could not find the net in OT. After reaching the Stanley Cup finals in 2019, the team exits the playoffs a bit earlier this season. Boston could see some roster changes, including the potential losses of Zdeno Chara and Torey Krug.

Hedman’s game-winner in overtime showcases the fact that the Lightning are finding ways to win. This is a much-improved team from the one that the Blue Jackets swept out of the first round last year.

Ondrej Palat scored the first goal of the game in the second period. Palat and Hedman each converted five goals for Tampa Bay in the series.

Point and Kevin Shattenkirk each added two assists, while Andrei Vasilevskiy recorded 45 saves. Lightning coach Jon Cooper spoke about the luxury of having Vasilevskiy in goal.

In beating Boston, the Lightning knocked out the team with the league’s best record in the regular season. Finally, they are back in the Eastern Conference finals.

Tampa Bay plays the winner of the series between the Philadelphia Flyers and New York Islanders. Although they are the one-seed, the Flyers trail the Islanders 3-1.

That is not something you get to say every day in hockey. The Tampa Bay …