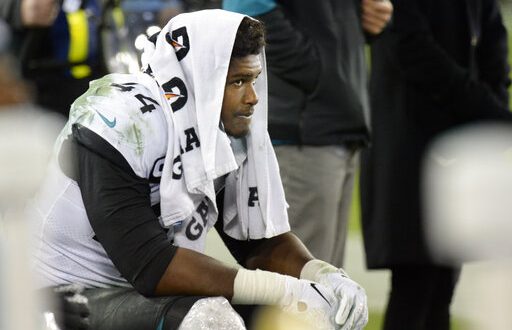 The 2020 NFL Season is going to look a bit different for defensive coordinator Todd Wash and the Jacksonville Jaguars.

And, not just because of the presence of COVID-19 and new protocols being put in place. With the loss of pass-rusher Yannick Ngakoue and the addition of more playmakers in the draft, the Jaguars have a lot of realigning to do.

The dust is still settling on a major trade that saw Yannick Ngakoue joining the Minnesota Vikings. In return, the Jaguars received a second-round pick in the 2021 NFL Draft and a conditional fifth-round selection in 2022.

It’s evident that my time in Jacksonville is up. But I want to say thank you to the organization for making it a home for myself for 4 years, and that I’ll never forget . That chapter is over with now. Nothing lasts forever. But I’m truly excited to start this new chapter! SKOL!

Wash says he will miss Ngakoue’s presence on the defense, but was pleased with how the trade went.

Ngakoue will now line up with Danielle Hunter as an edge rusher for the Vikings. For the Jaguars, Wash is still very excited for rookie K’Lavon Chaisson to get an opportunity to shine. Jacksonville took the former LSU linebacker with the 20th overall pick in the NFL Draft.

Wash has been impressed with what he’s seen from Chaisson since he fought his way through a hamstring injury earlier in fall camp. However, the Jaguars are already well-staffed at the linebacker position. Myles Jack will be lining up at weak side linebacker and Joe Schobert is filling the middle linebacker spot.

The eventual hope, though, is for both Chaisson and Allen to see time at defensive end.

Of course, K’Lavon Chaisson isn’t the only new playmaker for Todd Wash to work with. The Jaguars took former Gators cornerback C.J. Henderson with the ninth overall pick in the draft. Wash expects a lot of competition in the secondary in the coming days leading up to the season.

He expects players like Chris Claybrooks and undrafted free agents Luqman Barcoo and Amari Henderson to fight for a position on the team. But, Wash is especially excited by what he’s seeing out of C.J. Henderson in camp so far.

There are a lot of moving pieces for the Jaguars defensively, now more than ever after the Ngakoue trade. Needless to say, this team has a major opportunity to rebuild in the next few years, with 10 draft picks in 2021 and four of those picks in the first two rounds.

Of course, such defensive stars as Jalen Ramsey, Calais Campbell, A.J. Bouye and now Yannick Ngakoue are no longer with the team. But, Wash is hopeful new stars like Chaisson and Henderson can usher forward a new era for his defense.

I'm a third-year student at the University of Florida passionate about storytelling and sportswriting. My goal is to work in communications for a professional sports team after I graduate.
Previous Scott Stricklin Talks About the Future of Gators’ Sports
Next Preview: Trenton Prepares to Open Season at P.K. Yonge