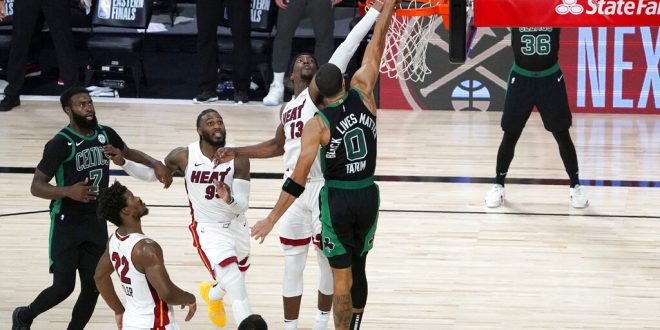 Epic Overtime Win for the Heat

Just when Jayson Tatum thought he was going to seal an overtime win for the Celtics with a dunk, Bam Adebayo appeared. Thanks to Adebayo’s epic last-second block, The Miami Heat got the win over the Boston Celtics in game one of the Eastern Conference finals.

An Epic Ending for the Heat

The Heat were down 12 points going into the fourth quarter. After a sloppy third quarter, things were looking rough for Miami.

However, They didn’t give up. With 22 seconds remaining in the game, Jimmy Butler hit a three-point shot to put the Heat up 106-105. After a foul, the Celtics made a free throw to tie the game. As time expired, Tatum shot from the three-point line and missed.

With 12 seconds remaining in overtime, Miami was up by two. Boston’s Tatum went for a 29-foot three-point shot and missed. The problem for Tatum was Adebayo. He saved the game for Miami with an unbelievable block.

Bam Adebayo’s block on Jayson Tatum’s dunk attempt was the best defensive play I’ve seen ever in the playoffs!!!!

Miami’s win over Boston marked an end to the Celtics seven-game streak of Game 1 wins. Butler says he thinks Miami is on the right track.

The two teams will meet for game two Thursday at 7 p.m.

Maddie Schmidt's goal is to become a college football reporter. Be sure to check out her sports blog, mygamedaygal.com.
@@maddieschmidt15
Previous LSU battling before season begins
Next Tiger Woods Looks for Turnaround At U.S. Open