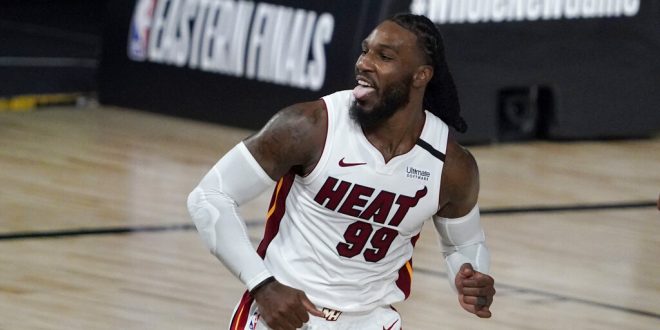 The Miami Heat came up big with a comeback win against the Boston Celtics 106-101. The Heat go up 2-0 in the NBA Eastern Conference Finals.

Down but Never Out… Again

For Miami, Game 2 began with a similar nightmarish start to Game 1.

Boston built a 17-point lead with two minutes and 31 seconds to go in the second quarter. And even following a late surge by the Heat, the Celtics carried a 13-point lead into halftime.

After expanding that lead to 15 points early in the third quarter, ESPN assessed that the Celtics had a 93.7 percent chance of winning Game 2.

But once again, the Heat didn’t seem to care what ESPN’s analytics team thought.

After shooing 1-9 from three and posting just 19 points in the second quarter, Miami turned it on offensively.

Behind Erik Spoelstra’s ability to adjust his defensive schemes to show both man and zone, the Heat forced seven Celtics’ turnovers in the third quarter. And most importantly, the Heat scored points on five of their possessions after the Celtics’ miscues.

A strong defensive effort held Boston to just 17 third-quarter points. And after an elite shooting performance in the first half, the Celtics severely regressed in the third quarter, shooting just 4-12 from the field and 0-4 from three-point range.

On the other end of the floor, Game 1’s defensive star, Bam Adebayo, demonstrated his offensive prowess.

Adebayo shot 7-8 from the floor, with several impressive alley-oop dunks after effective pick and rolls. He added a free throw and paced the Heat with 15 points in the third quarter.

After outscoring the Celtics, 37-17, in the third quarter, the Heat entered the fourth quarter with an 84-77 lead.

The Celtics would fight back to take a late five-point lead. However, Jimmy Butler would quickly erase the deficit with points in the paint on two straight possessions. Goran Dragic closed out the game by scoring seven of Miami’s last 11 points.

Dragic posted 16 points in the second half, which included nine points in the final frame.  In total, he finished with 25 points and five assists.

With just eight points heading into the fourth quarter, Brown scored 13 points of Boston’s 22 points in the last quarter. Most importantly, he made two straight three-point shots to cut Miami’s lead to three points with 49.4 seconds to go in the game.

It was between those two baskets that Goran Dragic hit his most important shot.

Up 102-98 with just under a minute to go, Dragic nailed a step-back jumper over Celtics’ big man Daniel Theis to answer Brown’s three.

That shot extended Miami’s lead to seven points, and Brown’s next three made the game a one-possession game.

Congrats to @MiamiHEAT coach Erik Spoelstra for moving up to 8th on the #NBAPlayoffs COACHING WINS list! pic.twitter.com/CFQgax855F

The Eastern Conference Finals will resume Saturday at 8:30 p.m., as the manufactured “home-court advantage” will shift in Miami’s favor.

Boston will look to avoid falling into a 3-0 series deficit. Meanwhile, Miami may need to prepare for the return of Gordon Hayward, who is on the brink of returning from an ankle injury sustained in Boston’s first postseason game against Philadelphia.

Gordon Hayward is progressing toward returning for Game 3 of Celtics-Heat after feeling good in Wednesday’s post-practice workout, a source with knowledge of the situation told @TheAthleticNBA. He expects to get more on-court work Friday with the hope of playing Saturday.

Miami will also hope to achieve a greater level of success early on to avoid the necessity for a major second-half comeback. But if a comeback is needed, the Heat have proven that they won’t back down.