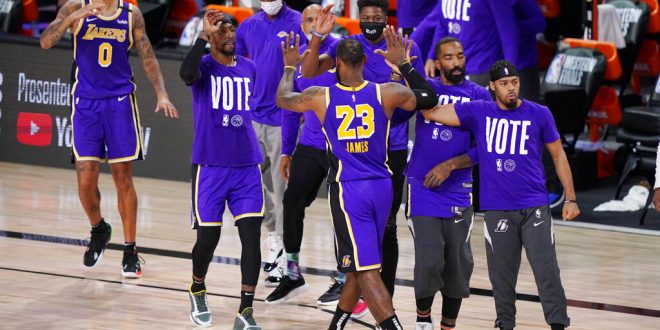 The NBA Finals will feature a matchup between the Los Angeles Lakers and Miami Heat. LeBron James and the Lakers are ready for tough test against the Miami Heat.

Playing for His Teammates

James, appearing in his 10th NBA Finals, will take on his former team. His motivation for winning is for his Lakers teammates.

Star forward Anthony Davis, averaging 26 points this season, is set to play in his first NBA Finals. Getting Davis his first championship title fuels James in this Finals matchup.

James was key in orchestrating a blockbuster trade with the New Orleans Pelicans to land Davis back in June. Winning a championship with Davis was a main reason why James targeted him in the offseason.

Along with Davis, the Lakers have two more starters who have never appeared in an NBA Finals in Kentavious Caldwell-Pope and Markieff Morris.

After missing the playoffs in 2019, the Lakers made the finals having lost just one game in each series. Despite this impressive feat, James says his job is not yet done and the Lakers are here to win.

James, citing the importance of getting the Lakers’ franchise back to where it once was, says winning a championship is why he came to Los Angeles.

The Lakers will appear in their first playoffs since 2013. Additionally, this is the Lakers first NBA Finals appearance since 2010.

The franchise has 32 finals appearances and 16 championships all-time. LeBron now hopes that, with this series, he can bring the Lakers back to former glory.

Thus far in the playoffs, James has done everything he can to get the Lakers back to this point. James, averages 26.7 points per game, is determined to win for the city, his teammates, and this franchise. With just four wins away from the title of champion, the Lakers are showing no sign of slowing down.

Quietly, this is one of LeBron James' best playoff runs ever:

No Lack of Intrigue

As Game 1 tips off in just over a day, there are plenty of compelling storylines to watch. For starters, James and Heat forward Andre Iguodala will meet in the Finals for the fifth time, as James tries to beat a team he’s won two championships with.

Catch the action on Wednesday at 9 p.m. on ABC.

Will Levenson is a Journalism and Sports Media major at UF. He produces daily shows for WRUF, including "Sport Scene with Steve Russell," "Harp on Sports," and "The Tailgate." In addition, Will provides weekly sports updates for WUFT News and radio Sportscenters for WRUF radio. Will has been a writer at ESPN Gainesville since September 2019.
@BigWillLevenson
Previous Chiefs, Ravens to Face Off in Monday Night Football
Next Mullen turning attention to Gamecocks