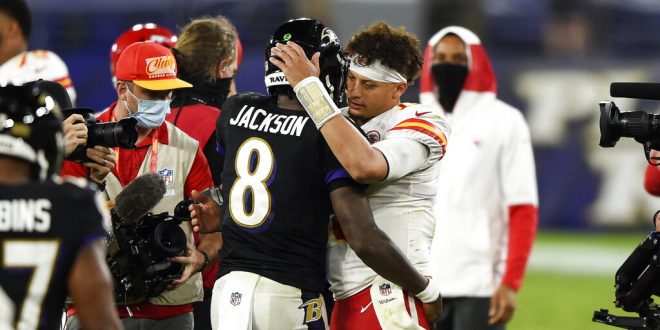 Mahomes played like an MVP with 385 passing yards and five touchdowns. Mahomes made history on primetime by becoming the fastest quarterback to reach 10,000 passing yards.

The Ravens and Lamar Jackson had a rare outing. The Chiefs’ defense contained Jackson to 97 yards and one touchdown.

The Ravens went up on the scoreboard first, 3-0, with a 26-yard field goal from kicker Justin Tucker. However, this would be the Ravens’ only lead of the night.

Kansas City’s opening drive was just a warm-up for Mahomes and the Chiefs’ offense. Less than a three-minute drive ended with a 3-yard rushing touchdown from Mahomes putting the Chiefs up 6-3.

The Chiefs took over in the second quarter with three passing touchdowns. Mahomes found Anthony Sherman, Tyreek Hill, and Mecole Hardman in the endzone to put Kansas City up 27-10 by the half.

Hardman finished the night with 81 yards on four receptions. Kansas City receivers combined for 385 yards compared to the Ravens 97 yards.

The Ravens quitted the Chiefs offense in the third quarter. Tucker returned to the field to drive in a 42-yard field goal, cutting the Kansas lead to 27-13.

Kansas City got the last word with Mahomes’ final touchdown of the night though. A 2-yard pass to Eric Fisher sealed the Kansas City win, 34-20.

The Kansas City defense may not be the main storyline for the Chiefs, but they proved themselves Monday night against a talented Lamar Jackson.

The Chiefs managed to control the turnover game forcing three fumbles, two of which came from Jackson.

Kansas City held the explosive quarterback to under 100 throwing yards but allowed more success for the Ravens run game.

Baltimore got the edge on the run game, totaling 158 rushing yards. Furthermore, Jackson led all Baltimore rushers with 83 yards.

The 3-0 Chiefs look ahead to Cam Newton and the New England Patriots on Sunday. Jackson and the Ravens (2-1) look to bounce back against Washington on Sunday at 1 p.m.