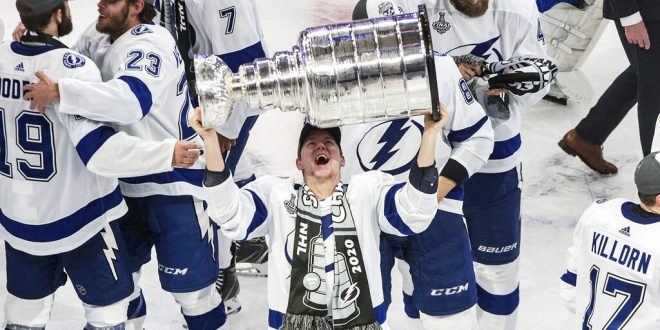 The Tampa Bay Lightning defeated the Dallas Stars 2-0 to become the 2020 Stanley Cup Champions. This is their first title since 2004, and their second franchise title.

Tampa Bay successfully battled its way into the finals, defeating the Columbus Blue Jackets; the Boston Bruins, the league’s No. 1 team in the regular season; and the New York Islanders.

The series between the Lightning and the Stars featured many extra minutes. Two of the four games played in this series resulted in overtime, with one of them going into double overtime.

Lightning center Brayden Point set a franchise record, hitting his 14th playoff goal in this game. Point’s goal was the one that started the Lightning’s path to the championship title.

Tampa Bay doubled its lead in the second period with a goal from center Blake Coleman.

The Lighting was dominant the whole game as they were able to prevent the Stars from scoring.

Point emphasized that this victory was the result of everyone’s hard work. He believes that every single player contributed in this game, as that’s where all of their focus was pointed towards.

Another Tampa Bay player breaking a record was Nikita Kucherov. He joined the Top 5 athletes with the most assists in an NHL playoff year with 27. He is just behind Wayne Gretzky and Mario Lemieux.

Bringing the Cup to Tampa

Tampa Bay has had a strong team for the last five years but never seemed to grab the championship title. The closer they have been to the title was in 2015 where they made it to the championship series but fell short to the Chicago Blackhawks.

The majority of that 2015 roster is still on the team and was part of this year’s success.

For these athletes, winning the cup is extra sweet, as they have been so close to victory these last few years, but were never able to get it.

For defensive player Victor Hedman, this victory “means the world to him” as he has been with the organization for more than a decade.

Hedman made his debut with the Lightning back in 2009.

Playing in the bubble

This championship ended an unusual NHL postseason, as it was held in a bubble due to the coronavirus pandemic. The NHL is one of the few leagues that decided to create a bubble to continue their season. The NBA and the WNBA are also among these.

Dallas and Tampa Bay made it all the way till the end, meaning that they were quarantined for around 80 days.

Despite the bubble challenges, playoff MVP Hedman says that it was all worth it.

“It takes a lot to be in a bubble for 80 days or whatever long it was,” said Hedman. “But it’s all worth it now. We’re coming home with the Cup.”

Camila is a senior at the University of Florida, who served as a beat writer for the women's basketball team from 2019 until the 2021 season. She was also a beat writer for the Gators football team during the 2020 season. Camila is also WUFT's news director as well as a sports reporter/anchor.
@CamilaMaffuz
Previous Mullen turning attention to Gamecocks
Next Patrick Mahomes shines in Kansas City Win Over Ravens