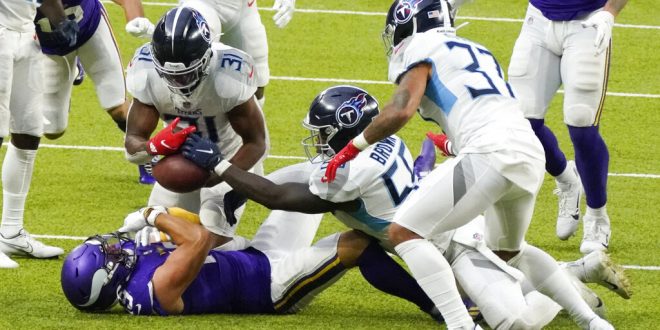 The Tennessee Titans and the Minnesota Vikings have decided to close team facilities indefinitely after eight members of the Titans organization tested positive for COVID-19.

Three Titans players DaQuan Jones, Beau Brinkley and Tommy Hudson, along with five members of the Titans staff are all asymptomatic as of Tuesday morning.

On Wednesday morning an additional Titan tested positive prompting the NFL to question whether the Titans will play against the Pittsburgh Steelers on Sunday.

NFL commissioner Roger Goodell wrote a memo to executives and team presidents from around the league Tuesday, saying “This is not unexpected. There will be players and staff who will test positive during the season.”

The Vikings currently do not have any positive tests on their roster. However, they have still decided to close team facilities out of caution. Minnesota hosted Tennessee this past week, where the Titans beat them 31-30.

The NFL has identified 48 people who were in close contact with the eight who tested positive through contact tracing.

Both teams are doing drive-in COVID-19 testing throughout the week, until they can be sure that it is safe to reopen the facilities.

The show goes on

As of now, the NFL plans to still have the Titans play against the Pittsburgh Steelers on Sunday. However, there is a contingency plan in place to play the game on Monday night if need be.

Saturday believes that Tennessee will find a way, and that they will have to have a next man up mentality.

Steelers head coach Mike Tomlin said Tuesday that they are preparing as if the game will be played Sunday.

“We’ve been given a mandate to prepare as if the game is going to be played and be played on time,” he said. “So that is our mentality.”

Saturday believes that this gives the Steelers a clear competitive advantage.

As for the Vikings, they are still expected to travel to Houston to take on the Texans Sunday.

Michael Hull is a sophomore at the University of Florida and is currently studying Journalism & Sports and Media.
@Michael_Hull33
Previous Recap: American League Wildcard Wins from Tuesday’s Game Ones
Next Serena’s Chase For 24 Stalls at The French Open