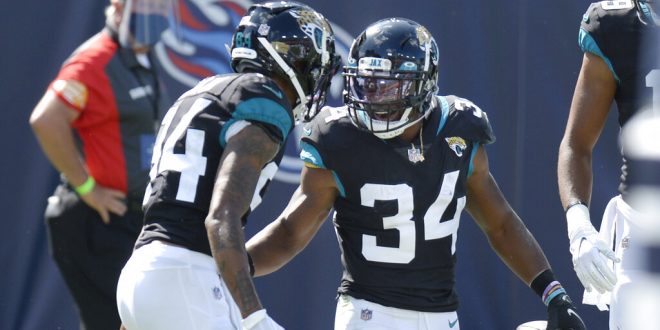 Jacksonville Jaguars running back Chris Thompson (34) celebrates after scoring a touchdown against the Tennessee Titans in the second half of an NFL football game Sunday, Sept. 20, 2020, in Nashville, Tenn. (AP Photo/Mark Zaleski)

Jaguars look to get back in win column at Cincinnati

The Jacksonville Jaguars are back in action for the first time since last week’s Thursday night game as they take on Joe Burrow and the Cincinnati Bengals.

After a week 1 win against the Colts to open the season and close loss to the Titans the next week, the Jaguars looked unimpressive in their loss to the Dolphins. Picking up a win this week would be a big confidence boost for this young team.

Jacksonville posted 57 points in their first two games but couldn’t get a rhythm going on offense in week 3. Garder Minshew’s production has dipped each week and posted just a 79 rating with 275 yards and no touchdowns in the loss.

The Jaguars will be taking on a Bengals team that is still looking for its first win of the season. They’re coming off a tie to the Philadelphia Eagles. With all eyes on the young quarterbacks, there are definitely a couple of areas that will make a difference on Sunday.

Jaguars are fast…keep the ball on the ground

For the Jaguars to come out with a win, they’re going to have to dominate in the trenches. With Minshew’s struggles, Jacksonville is going to have to find a way to move the ball on offense. With injuries to a couple of their receivers, the Jaguars will have to rely on their running game.

Undrafted rookie James Robinson has had an excellent start to the season posting over 200 yards and three touchdowns on 4.9 yards per carry. In fact, the Jaguars didn’t have their second rushing touchdown of last until week 12 and finished with three all year. His hot start earned him Offensive Rookie of the Month honors.

Undrafted ➡ Offensive Rookie of the Month

After waiving former first-round pick Leonard Fournette before the season, many were unsure what Jacksonville’s ground game would look like. For now, it seems like they figured it out. Head Coach Doug Marrone had high praise for his young running back.

On the other side is a sluggish running game and struggling offensive line. Joe Mixon is averaging just 3.2 yards per carry and Joe Burrow has already been sacked 14 times this season, eight last week. The Jaguars are no “Sacksonville” anymore but should have plenty of opportunities to get to the quarterback.

What about the Bengals?

Poor offensive line play hasn’t stopped Burrow from slinging the ball. The first overall pick in this year’s draft has thrown for over 300 yards in back-to-back games. In addition, Jacksonville ranks last or near the bottom in most major passing defense categories.

When asked about his team’s defense, Maronne emphasized focus and being in position. It’s something he worked on with the team this week in practice in hopes somebody comes away with a game-changing play on Sunday.

On the other side of the ball for the Bengals is a secondary that has played well to start the season. Cincinnati has given up the sixth least passing yards and forces the fourth-lowest completion percentage. As alluded to earlier, for Jacksonville to come away with the win, they’ll have to be effective on the ground.

Up to 6,000 fans will be allowed into Paul Brown Stadium for Sunday’s showdown. Just like everything else this year, anything and everything is possible. Kickoff is set for 1 p.m.