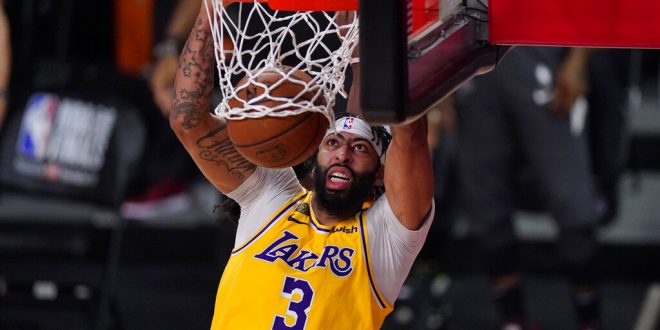 Lakers Stun the Heat in Game 1

The Los Angeles Lakers decided to make it anything but easy for the underdog Miami Heat in the NBA Finals.

The Heat had a good first six minutes of game 1, but after that, it was all Lakers. Los Angeles led by as many as 32 points in their 116-98 win.

This loss makes it the 19th time that Maimi has lost a game after leading by double digits sometime during the game. However, Miami is now in a familiar spot. All three of Miami’s championships have come after dropping the finals opener.

Davis racked up 34 points to lead the Lakers to their game one win. The star of the night also grabbed nine rebounds, blocked three shots and went 10-10 from the free-throw line.

The Heat tried to stifle Davis early with double coverage, but soon it was no match.

With his extraordinary first finals’ game performance, Davis joins the ranks with some of the all-time greats. The only three players to score more than Davis in their first NBA Finals game are Allen Iverson (48 points), Kevin Durant (36 points) and Michael Jordan (36 points) and Davis knows what an honor it is to be among them.

It was an uncharacteristic night for the Lakers when it came to shooting three’s.

Of the 22 teams in the bubble, the Lakers ranked 21st in three-point percentage. Since at Disney, Los Angeles has only shot for 33.6% from deep. Out of postseason teams, the Lakers are the only team to have two games shooting less than 25% on threes.

However, the team did not get the memo on their typical three-point game last night.

The Lakers made 15 three-pointers in last night’s rout of the Heat. And some of everyone was hot from beyond the arc, with nine of the 12 players with minutes grabbing at least one three. And two of the players without one only had one minute of playing time.

Miami will look to bounce back in game two, but the injuries the team sustained from game one may make it difficult. The Heat had two players exit the game with injury in Goran Dragić and Bam Adebayo.

Dragić exited the game in the second quarter with a foot injury, that has now been identified as plantar fascia. This could affect his status for the rest of the finals. And while Dragić not being able to come back would mean losing a big presence on the court, point guard Jimmy Butler knows Miami will just have to play harder and win for Dragić.

The Heat then lost an all-star center in Adebayo when he left the game after aggravating a shoulder strain. Dragić played just 15 minutes earning six points, while Adebayo was not in for much longer with 21 minutes, only earning eight points.

And while he did not leave the game, Butler had to fight through a twisted left ankle to remain in the game and help his team. Even with the ankle, Butler led his team in scoring with 23 points.

However, even with the loss of two huge performers, Butler knows this was not an excuse for the loss.