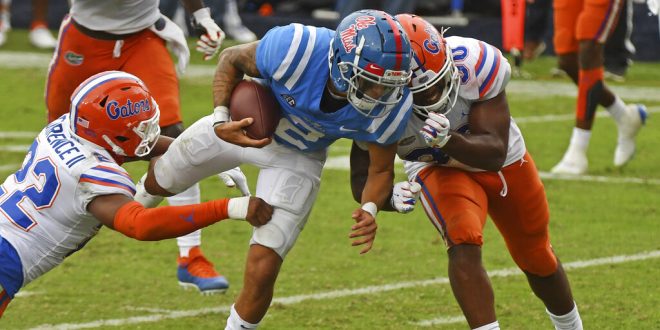 However, Florida’s depth and the addition of Georgia transfer, Brenton Cox Jr., should help combat its lost players. Still, the Gators allowed 170 yards on the ground and nearly 400 yards through the air.

UF defensive coordinator, Todd Grantham, admitted the defense “made too many mistakes” and “didn’t play to [its] standard” against Ole Miss. Grantham noted the defense’s inability to finish plays, which in turn led to explosive plays and drives.

Sophomore cornerback Kaiir Elam called Florida’s sub-par defensive performance unacceptable if the team wants to go far this year. “Looking back at the film, I’m not going to lie, I was kind of pissed off,” Elam said. The keys to bouncing back,  according to Elam, are a “short-term memory” and overall improvement, which “starts in practice.”

Regardless of what actually caused the lousy performance versus Ole Miss, Florida head coach Dan Mullen expects the Gators to be “a lot better defensively come Saturday.”

Return to the Swamp

The Gators return to Gainesville ahead of their home-opener on Saturday against the 0-1 South Carolina Gamecocks.

As for the offense, Kyle Trask and company should have no problem scoring points against a South Carolina defense that allowed over 250 passing yards last week.

Hello! I am a sophomore at UF studying journalism sports & media. I help contribute radio and website content for ESPN Gainesville. Additionally, I am a sports writer for The Independent Florida Alligator and help cover the UF women's basketball team. I am also the UF softball beat reporter for ChompTalk.com.
Previous Two High Schools Football Games in the Area Tonight
Next LSU Football Hoping to Bounce Back Against Vanderbilt

The NFL draft is only two weeks away, and several Gators’ players are expecting to …