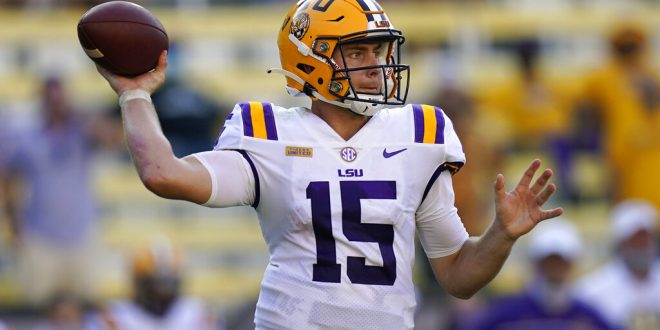 LSU Football Hoping to Bounce Back Against Vanderbilt

The defending national champion LSU Tigers will be looking to clear their name at Vanderbilt this weekend after losing to unranked Mississippi State at home in week 1. The Tigers lost to the Bulldogs 44-34, allowing quarterback K.J. Costello to pass for 623 yards and six touchdowns, and dropped to No. 20 in the AP Poll.

So, the question facing Coach Ed Orgeron and first-year starter Myles Brennan is: how do we right the ship?

Cornerback Derek Stingley Jr. will be making his season debut for the Tigers, which should add some experience to a secondary that floundered against the Bulldogs. In a teleconference with SEC reporters, Coach O. said he also hopes to see improvements to his offensive line in week 2.

On the other side of the ball, the Vanderbilt Commodores are coming off a close 17-12 loss to the formerly No. 10 ranked Texas A&M Aggies. The Commodores could conjure up only 255 total yards on offense but forced three turnovers in the loss.

One of the biggest headlines going into Saturday’s game is the potential return of Derek Stingley Jr. Stingley was hospitalized the Friday night before the Tigers’ season opener with an illness unrelated to COVID-19. The LSU defense missed him badly, as Costello quarterbacked the Bulldogs to victory and SEC Player of the Week honors.

When Orgeron was asked about Stingley’s status on Wednesday, he said it’s “not conclusive” that he’ll play, but he “should play.” The Tigers coach also recognized the lift Stingley could bring to the defense.

As a freshman, Stingley recorded six interceptions in 15 games.

However, the sophomore defensive back isn’t the only Tiger player battling injury going into week 2. Starting left tackle Dare Rosenthal didn’t practice on Tuesday and is listed as questionable for week 2. Rosenthal went down with an injury in the fourth quarter of the Mississippi State game.

One of the biggest takeaways from the Commodores week 1 loss to the Aggies was a dominating defensive front. Pro Football Focus College gave the Vanderbilt defensive line an 81.0 score, which ranks first in the nation among power 5 teams. The defense gave up only 17 points and held returning QB Kellen Mond to only 189 passing yards.

On the offensive side of the ball, true freshman quarterback Ken Seals is starting in only his first year with Vanderbilt. Against Texas A&M, Seals threw for 150 yards, one touchdown and two interceptions.

In the end, with a young offense, the Commodores are going to have to rely on their defense to control the tempo of the game. Of course, Joe Burrow’s successor Myles Brennan will be playing in only his second collegiate start on Saturday.

Junior quarterback Myles Brennan did not look like Joe Burrow in the season opener against Mississippi State. Few do, though, and what Brennan was able to offer were 345 passing yards and three touchdowns. Overshadowed by a surprising loss and Costello’s gem, Brennan turned in a good offensive performance throwing the ball.

Coach Orgeron has been impressed by Brennan’s determination in practice this week following the loss. However, there are a few improvements Orgeron will be looking for from Brennan in week 2.

At first glance, Brennan’s week 1 numbers seem to indicate a good performance. But after an undefeated national championship season, the expectations in Baton Rouge are through the roof. Orgeron said that LSU is ready to “get this taste out of our mouth.”

I'm a third-year student at the University of Florida passionate about storytelling and sportswriting. My goal is to work in communications for a professional sports team after I graduate.
Previous UF Players and Coaching Staff Confident Defense Will Improve After Lackluster Season-Opener
Next Raiders Volleyball Takes Away Hurricanes Winning Streak