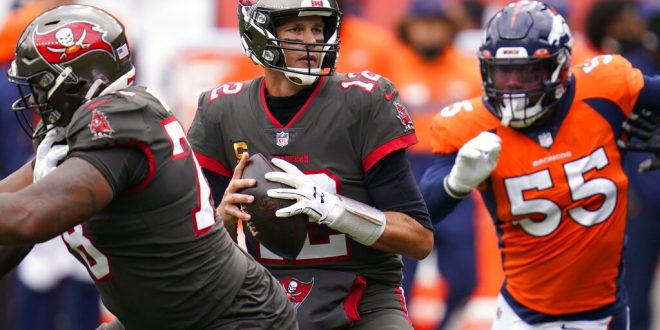 Tampa Bay Buccaneers quarterback Tom Brady, center, looks to throw a pass during the first half of an NFL football game against the Denver Broncos, Sunday, Sept. 27, 2020, in Denver. (AP Photo/David Zalubowski)

Buccaneers, Dolphins gear up for home stands on Sunday

The Tampa Bay Buccaneers and Miami Dolphins are each coming off Week 3 wins. The Dolphins put a notch in the win column for the first time this season with a 31-13 victory over Jacksonville, while the Bucs earned their second-straight win, this time against the Broncos.

Both are back in action this weekend with interconference home games, and the two top teams in Florida currently will aim to build off the momentum from last week’s wins.

Dolphins search for the upset

There haven’t been many teams in the NFL more impressive this season than the Seattle Seahawks. Coach Pete Carroll’s squad is 3-0, and quarterback Russell Wilson is stating his case for league MVP with nearly 1,000 yards and 14 touchdowns to just one interception so far.

Miami’s defense will need a similar performance to last week, when it shut down Gardner Minshew II and the Jaguars offense for most of the game. If not, it could be a long day going up against a Seattle attack that has put up more than 30 points in every game so far.

The Seahawks have shown some vulnerability on defense, however. Miami quarterback Ryan Fitzpatrick rectified a slow start to the season with an impressive performance last Thursday, completing 18-of-20 passes for 160 yards and two touchdowns.

If Fitzpatrick can find that success again, it could provide the Dolphins with enough firepower to at least compete with the Seahawks passing game, which is sure to put points on the board.

Tom Brady’s addition to the Tampa Bay roster hasn’t been quite as prolific through three games as some Bucs fans might have hoped. But since a season-opening loss to New Orleans, the team has been impressive.

It has won back-to-back games, and Brady threw for almost 300 yards and three touchdowns in the Buccaneers’ win against Denver last week. One factor that led to Brady’s success was the involvement of tight end Rob Gronkowski, who had six catches for 48 yards last week after notching just two catches in Week 1 and none in Week 2. Despite his age and health concerns, if he’s at 100 percent, he’s a matchup problem for opposing defenses.

OC Byron Leftwich was asked about TE Rob Gronkowski's increased role in the receiving game this last week & chalked it up to comfort level now. Everything was new to Gronk this year.

"Learning an offense takes some time … it's not just about knowing it on paper."

Tampa Bay has the luxury of facing a rookie quarterback this week in the Chargers’ Justin Herbert. He has been solid so far in his two starts since stepping in for Tyrod Taylor, totaling over 300 yards with a touchdown and a pick in each.

The Bucs kept an inexperienced quarterback in Jeff Driskel in check last week. If they can do it again, they’ll have a good chance of getting to 3-1 and taking control of the NFC South.