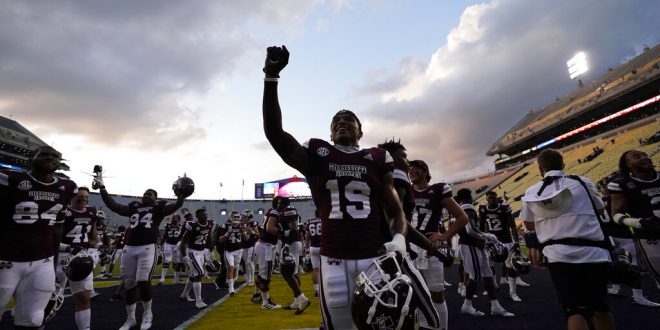 The Mississippi State Bulldogs look for their second straight win on Saturday. They play host to the Arkansas Razorbacks in week 2 of the SEC college football season.

The Mike Leach era in Starkville, Mississippi, got off to a bang last week against the LSU Tigers. The 16th-ranked Bulldogs defeated LSU, 44-34, in what could arguably be called a shocker over the defending champs at Death Valley.

Leach is known for having “air-raid” offenses in his time as a head coach. He put Mississippi State on notice after the performance over the Tigers. Bulldogs’ quarterback K.J. Costello, a graduate transfer from Stanford, had a record-breaking performance against LSU, passing for an SEC-record 623 yards.

In addition to his passing numbers, Costello also threw for five touchdowns to help carry Mississippi State to a week 1 victory.

Now, the Bulldogs shift their focus to to the Razorbacks. After an impressive victory last week, the main thing for Leach in practice this week has been making sure his players stay locked in. They also need to make sure they don’t get caught up in all of the attention.

Unlike the Bulldogs. the Razorbacks weren’t as successful as their opponent was last weekend. Arkansas, which also played its first game under a new head coach in Same Pittman and transfer quarterback Felipe Franks, dropped its season opener to the Georgia Bulldogs, 37-10.

After jumping out to an early lead in the first quarter, the Razorbacks struggled to put much together on the offensive side of the ball the rest of the game. Franks, the former Florida quarterback, finished his Arkansas debut with 200 yards, one touchdown and one interception.

Pittman said his team has had a good couple of days of practice this week and is looking forward to the challenge of playing the Bulldogs Saturday.

Furthermore, Pittman also discussed the difficulties of defending an air-raid offense. He said the biggest thing the Razorbacks are going to have to do is tackle and put pressure on Costello.

Both teams are eyeing two different outcomes in Saturday’s game. Mississippi State will look to keep its hot start going, while Arkansas looks for its first win on the young SEC season.