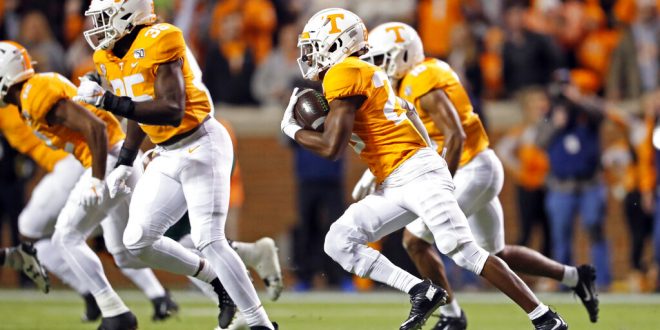 This week in the SEC, the Missouri Tigers are traveling to Knoxville to take on the Tennessee Volunteers. This SEC matchup is set to kick off at noon on Saturday. With Mississippi State upsetting LSU, Tennessee is going into this game with the longest win streak of any power five teams, seven.

Tennessee is coming off a 31-27 win over South Carolina. A pretty evenly matched game that was decided by a special-teams error by South Carolina, sealing the win for Tennessee.

Opposite of Tennessee, Missouri lost in their first week of action to the number 2 ranked team Alabama, 38-19. A poor effort in the first half by Missouri only managing to score three points to Bama’s 28.

The series record between these teams is five wins for Missouri and three for Tennessee. Although, Tennessee won the most recent matchup last season, 24-20.

What to Expect for Tennessee

Tennessee’s best chance of winning is running the ball. Last week against the Gamecocks, Tennessee ran for 133 yards. On the other hand, Missouri allowed Alabama to rush for 111 yards and Najee Harris found the end zone three times on the ground.

The Volunteers have the backs to take over a game. Ty Chandler and Eric Gray are coming off a combined 25 rush attempt game. They’re stout and trustworthy. Tennessee’s starting quarterback, Jarrett Guarantano, can also pitch in with the run game but can be relied on for passing, as well. He threw for 259 yards and a clutch 32-yard fourth-quarter touchdown that would eventually be the go-ahead score against South Carolina.

What to Expect for Missouri

It is tough to judge the Tigers based on last week’s performance because the team faced Alabama. Arguably the best team in the country. Also, this was head coach Eliah Drinkwitz’s debut at Missouri. The defensive Coordinator Ryan Walters came to the team’s defense by saying, “I don’t want to overreact off of one game after arguably the best offense in the country.”

There is a takeaway from Missouri week one and it’s their quarterbacks. Mizzou looks to be working a two-quarterback option with TCU transfer Shawn Robinson and sophomore Connor Bazelak. Robinson took the majority of the snaps but Bazelak got two drives in and ran in a touchdown on his final possession. The two-quarterback system will keep defenses on their toes. Robinson is a solid option that has been in the system since 2018. The NCAA denied his eligibility last season so he trained behind Kelly Bryant. During his final season at TCU, Robinson threw for over 1300 yards, completed 60% of his passes, and threw nine touchdowns. Robinson also threw eight interceptions. No interceptions were thrown by Robinson on Saturday, but he fumbled the ball twice and one was lost.

In an interview, head coach Eliah Drinkwitz talks about needing to manage turnovers and being sharper. Head Coach Jeremy Pruitt gives praise but also emphasizes the right plan of attack.

Pruitt: Coach Drinkwitz is very creative on offense. They spread the ball around, stretch you horizontally and vertically. Gotta find ways to create turnovers and hold them to field goals.

It should be an interesting SEC matchup, where no team has an easy matchup. Tennessee is projected to win, but they didn’t look strong in week one and Missouri can catch fire at any time. 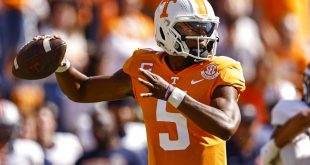 Two highly-touted quarterbacks clash in Knoxville, Tennessee, Saturday as Will Levis and the No. 19 …