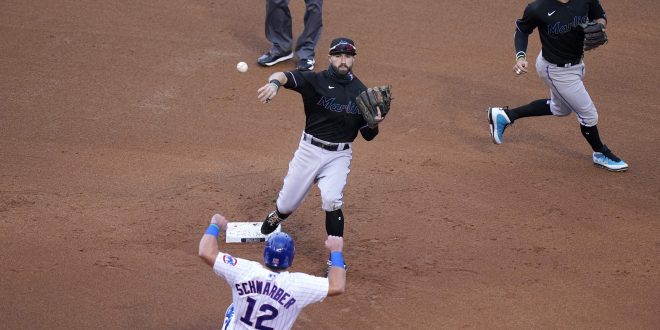 Miami Marlins second baseman Jon Berti, top, throws to first after getting the force on Chicago Cubs' Kyle Schwarber (12) as shortstop Miguel Rojas, right, looks on in the fourth inning of Game 1 of a National League wild-card baseball series in Chicago, Wednesday, Sept. 30, 2020. The Cubs' Jason Heyward, who was safe at first on the fielders choice, advanced to second on a throwing error by Berti. (AP Photo/Nam Y. Huh)

Game 2 of the Marlins and Cubs NL wild card Series was postponed yesterday due to weather in the forecast. The game will now be played today at 2 p.m. After winning Game 1 on Wednesday, the Marlins lead the series 1 -0 and have the opportunity to close it out today.

The Chicago Cubs will be looking to avoid a playoff sweep today after losing 5-1 on Wednesday. Manager David Ross explained that the Cubs couldn’t adjust quickly enough to the Marlins’ pitching.

“The offense is still trying to get going. We didn’t swing it well. Looking to get that side of the ball going in game two,” Ross said.

The Miami Marlins also struggled at the plate until late in the game.  Cubs pitcher Kyle Hendricks ended his day on the mound when the Marlins scored five runs off him in the seventh inning. Manager Ross broke down Hendricks’ pitching.

The Braves and Reds wild card series came to a conclusion yesterday after the Reds could not score a single run in the entire series. The Atlanta Braves look towards Game 1 of the first round of the playoffs at noon on Wednesday.

Cincinnati Reds manager David Bell explained that the team is disappointed but proud of the season as a whole.

“It takes so much to get where we got in the last couple of days. No one is pointing a finger. Our pitching was unbelievable against a great lineup. We’re a team. We’ve won as a team and today we lose as a team,” Bell said.

Parker Welch is a Junior at the University of Florida majoring in Sports Media at the College of Journalism & Communications.
@parkerrwelch
Previous Raiders Volleyball Takes Away Hurricanes Winning Streak
Next Ole Miss Vs Kentucky Preview