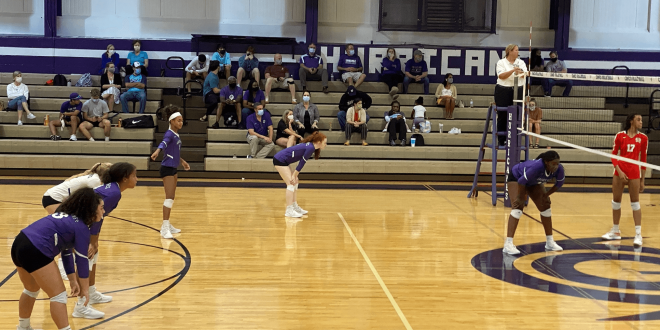 The Hurricanes prepare for a serve from the Raiders. (Image from Kaitlyn Wadulack)

The Hurricanes (10-5) gave it their all with some close calls in the third set of the match, but the Raiders (13-6) swept Gainesville’s shot at victory.

The Raiders dominated the Hurricanes right off the bat, with a block by junior setter and opposite hitter Rylie Tam and freshman middle blocker Joselynn Sanjurjo. The Hurricanes struggled to make any offensive plays, gaining their first point as a result of the Raiders serve hitting the net. Gainesville began to make some plays after sophomore middle blocker Ta’Niya Walker scored with a hit. The Raiders did not let this last long, however, with senior outside hitter Kate Weeks scoring with a kill and an ace, and Tam scoring with a kill. The Raiders led 9-3.

After a timeout by the Hurricanes, senior middle blocker Jayden Tompkins scored with a kill. Freshman defensive specialist Meme Davis followed up her teammates’ kill with an ace. The Hurricanes began to get into a groove, but the Raiders continued to dominate and increase their lead. Missed digs, out-of-bounds serve, and miscommunication for coverage left the Hurricanes vulnerable. The Raiders took that to their advantage and won the set 25-16 with an ace.

At the start of the second set, the Raiders scored consecutively for five plays as a result of out of bounds hits and missed digs by the Hurricanes. The Hurricanes struggled defensively, leaving sections of their court unguarded. Raiders sophomore setter and opposite hitter Jalyn Stout took advantage of this, scoring two kills in open, defenseless court.

The energy of the game shifted when sophomore outside hitter Jasmine Verbust scored with a kill, and Walker followed up with a block. The Hurricanes were now only five points behind the Raiders 20-15 lead. After two missed digs, the Hurricanes called for a timeout. Once again, this timeout proved worthy of increasing team spirit for the Hurricanes. Gainesville came out with another block by Walker and an ace by senior setter Morgan Spear, closing in on the Raiders. Their efforts were hard-fought, but, again, the Hurricanes lost the match after an ace by Weeks. The score at the end of the second set was 25-19 Raiders.

The Hurricanes wasted no time once the third set began. Verbust scored on the opening rally with a kill, and senior defensive specialist Meagan Messick followed with an ace. Gainesville took the lead for the first time in this match, scoring six points in a row. This shift in energy for the Hurricanes was a result of the talk head coach Chancie Vice had with her team after the end of the second set.

The Raiders didn’t stay behind for long and came back from their slow start after the Hurricanes missed four consecutive digs. A kill by Raiders junior outside hitter Faith Marquis tied up the set at 7-7. Santa Fe began to take over the lead after Stout scored with a quick hit, three kills, and a block. The Hurricanes responded, with a kill from Tompkins and an ace by junior libero Nicole Brandt. The score was 22-20 Raiders.

Both teams alternated back and forth with points in the final minutes of the set. A hit by Davis left the Hurricanes only one point behind the Raiders. Tam’s kill gave Santa Fe an extra point cushion in their lead. The Hurricanes dug deep, and Tompkins’ block left the score 23-22 Raiders. Stout’s hit gave Santa Fe a 24-22 lead, but a kill by Davis brought Gainesville back to being only one point down. In the final rally of the set, the Hurricanes hit the ball out of bounds, and the Raiders won 25-23.

Even though they are coming off of a loss, the Hurricanes grew as a team. Coach Vice saw her team have some of their best plays in the final set of tonight’s match.

The Hurricanes next match will be October 5 at home against the Bell Bulldogs at 7 p.m.

Kaitlyn Wadulack is a second-year Journalism student specializing in Sports and Media at the University of Florida. You can reach Kaitlyn at k.wadulack@ufl.edu.
Previous LSU Football Hoping to Bounce Back Against Vanderbilt
Next MLB Roundup: Marlins in the Playoffs, Braves Sweep Reds