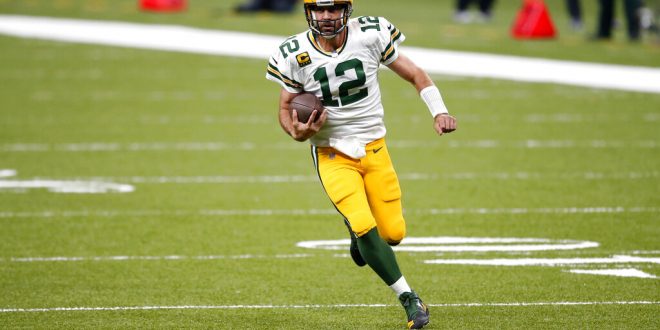 The undefeated Green Bay Packers and quarterback Aaron Rodgers host the winless Atlanta Falcons for Monday Night Football at Lambeau Field.  While the Falcons may be 0-3, they are still one of the leagues most potent offenses making this matchup one to watch.

The Falcons have given up big fourth quarter leads two weeks in a row losing to both the Dallas Cowboys 40-39 and the Chicago Bears 30-26.

Rodgers has started the year strong completing 67 percent of his passes for a total 887 yards, nine touchdowns and zero turnovers.

Furthermore, Rodgers has been sacked only twice in the last three games.

Rodgers is a two-time NFL MVP and has the six straight wins playing on Monday nights. The streak is one of the longest active and started with a win over the Falcons.

Aaron Rodgers has 6 straight wins on Monday Night Football, a streak that began with a 43-37 win vs Falcons in Week 14, 2014

His streak is tied with Ben Roethlisberger for longest active win streak by a starting QB on Monday Night Football pic.twitter.com/sjmIIpZpQ4

Rodgers said this year he has been playing how he likes to and in the end it all comes down to how well he prepares and executes.

The Falcons’ head coach Dan Quinn talked about how dangerous Rodgers is at the line of scrimmage, and how it forces the Flacons to be very disciplined.

Ryan has also started the season hot throwing for 961 yards including seven touchdowns and two interceptions.

He has a favorable matchup against the Packers defense which has allowed its opponent to complete 72.3 percent of passes.

Both the Packers and the Falcons have injury troubles at the wide receiver position.

Green Bay receiver Davante Adams sat out Week 3 out with a hamstring injury. The team has him listed as questionable going into tonight’s game.

Allen Lazard, who had a breakout game in Week 3 with 146 yards and a touchdown, underwent core muscle surgery and will not play against the Falcons.

The Falcons have their own issues with their star receivers Julio Jones and Calvin Ridley. Jones and Adams missed Week 3 with a hamstring injury and was limited in practice. The team listed him as questionable going into the game as well as Ridley. Ridley, who is seventh in the NFL with 349 receiving yards and four touchdowns on the year, may not play due to ankle/calf injuries.

It is also unclear if Russell Gage, another Flacons receiver has cleared concussion protocol.

In the 2014 matchup between the two quarterbacks they combined for 702 passing yards. This game is sure to be an interesting one as the Flacons fight for their first win and the Packers try to stay undefeated.

The Baltimore Ravens travel to Las Vegas, Monday, to take on the Raiders. The Ravens …