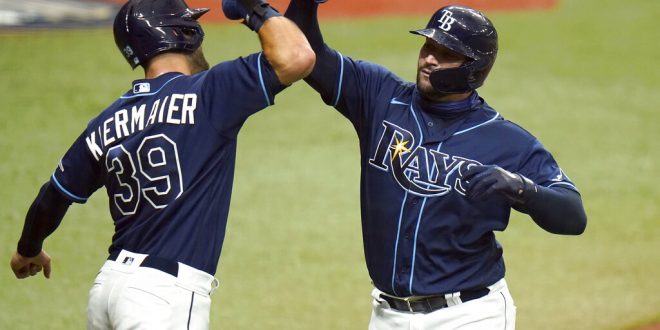 Rays, Yankees Set to Square Off in Game One of ALDS

It’s time for postseason ball in the MLB. The American League Division Series begins tonight as the Tampa Bay Rays take on the New York Yankees.

The Tampa Bay Rays are no strangers to the New York Yankees. The two teams played a total ten games against one another during the regular season. Tampa Bay came out on top, winning eight of those ten games.

However, their relationship goes beyond what transpired on the diamond in 2020. The two teams have been rivals for years, dating back to spring training in 2008. During a game, then Tampa Bay shortstop Elliot Johnson plunged into catcher Fransisco Cervelli and broke his wrist, writes Erik Boland of Newsday.com.

Intensity remained during their matchups this season. During a showdown at Yankee Stadium on Sept. 1, Yankee closer Aroldis Chapman hurled a fastball near Tampa Bay third baseman Mike Brosseau’s head. The incident prompted an angry response from Rays’ manager Kevin Cash, whose words have since been put on a t-shirt and worn to taunt the Yankees.

They're here because they want to win a championship.

For the Rays to beat the Yankees, one thing must be spot on.

They handled that aspect of the game quite well during the regular season, holding the Yankees to 3.40 runs per game.

However, things could be different this time. During the regular season, Yankees sluggers Giancarlo Stanton and Aaron Judge had limited at bats, Topkin notes.

With them both back behind the plate, the Yankees’ offense could look completely different.

Which means starting pitcher Blake Snell must be on his A-game.

If the Yankees want to come out on top, they must pay attention to detail. According to Yahoo Sports, they committed an average of 0.77 errors per game, which is second-most in the MLB.

Like with the Rays, pitching will also play a vital role. Gerrit Cole will take the mound for the Yankees in Game 1, and Yahoo Sports reports that the last time these teams squared off, he gave up five home runs. Additionally, he allowed for 20 hits.

If those numbers are put up tonight, the Rays could run away with Game 1.

Game One of the ALDS will be broadcast on TBS. First pitch is slated for 8:07 PM.