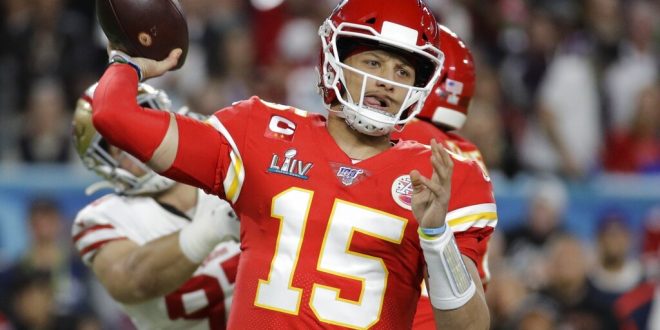 FILE - In this Feb. 2, 2020, file photo, Kansas City Chiefs quarterback Patrick Mahomes (15) passes against the San Francisco 49ers during the first half of the NFL Super Bowl 54 football game in Miami Gardens, Fla. The Chiefs made sure they will have Super Bowl MVP Mahomes around as long as possible. Mahomes agreed to a 10-year extension worth $503 million, according to his agency, Steinberg Sports. The deal is worth $477 million in guarantee mechanisms and includes a no-trade clause and opt-out clauses if guarantee mechanisms are not met. It is the richest contract in professional sports history, surpassing Mike Trout’s $426.5 million deal with the Los Angeles Angels. (AP Photo/Patrick Semansky, File)

After being postponed on Sunday, the New England Patriots will travel to Kansas City to take on the Chiefs for Monday Night Football.

As the COVID-19 pandemic creeps it’s way into NFL locker rooms, we’ve now seen the postponement of two NFL games. Sunday’s tilt between the Tennessee Titans and the Pittsburgh Steelers has been moved to Oct. 25 due to an outbreak in Tennessee. Luckily, in tonight’s game, there was no outbreak.

A Big Loss for New England

Patriots quarterback Cam Newton, who joined the team in June, tested positive for COVID-19 over the weekend. Since Newton’s test came back positive, every other player on the Patriots has tested negative. Thus, tonight’s battle between Kansas City and New England is on tonight. New England, of course, will be without their starting quarterback in Newton.

Veteran quarterback Brian Hoyer is expected to start tonight for New England. Hoyer, 34, will be making his first start since Week 10 of last season. How Hoyer performs tonight will be key if the Patriots want to upset the defending champions on the road. Finding a way to contain the Chiefs dynamic offense, however, should be the top priority for head coach Bill Belichick and company.

The Chiefs offense currently ranks third in the NFL in yards per game with 433.7. Defending Super Bowl MVP, quarterback Patrick Mahomes, is maybe the most exciting player in the league, and is incredibly difficult to stop. Mahomes ranks fourth in passer rating at 114.3. Putting that into perspective, over the last 20 years, the average league-leading passer rating is 110.3.

Along with Mahomes, Kansas city also has speedsters Tyreek Hill and Mecole Hardman on the 0utside, athletic tight end Travis Kelce, and shifty rookie running back Clyde Edwards-Helaire. All together, stopping this incredibly diverse offense becomes and extremely daunting task.

Points May Come at a Premium

Offensively, the Patriots must find a rhythm. A consistent running game could do just that, but it will be important for Hoyer to get the ball out of his hands quickly. Expect to see a lot of the short and play action passing game for the Patriots tonight.

Defensively, keeping Mahomes’ Magic to a minimum is vital. Containing him inside the pocket and limiting big plays could keep the Patriots in this game.

On offense, the key for the Chiefs is simple: don’t change. They must continue to spread the ball around and get everyone of their dangerous weapons involved. Getting Edward-Helaire heavily involved in both the run and pass game will help get more points on the board.

On defense, not allowing New England’s run game to find a rhythm should do the trick. Expect Kansas City’s defense to be aggressive and blitz Hoyer early and often to rattle the new starter.

Will Levenson is a Journalism and Sports Media major at UF. He produces daily shows for WRUF, including "Sport Scene with Steve Russell," "Harp on Sports," and "The Tailgate." In addition, Will provides weekly sports updates for WUFT News and radio Sportscenters for WRUF radio. Will has been a writer at ESPN Gainesville since September 2019.
@BigWillLevenson
Previous A’s take on Astros in Game 1 of ALDS
Next Rays, Yankees Set to Square Off in Game One of ALDS