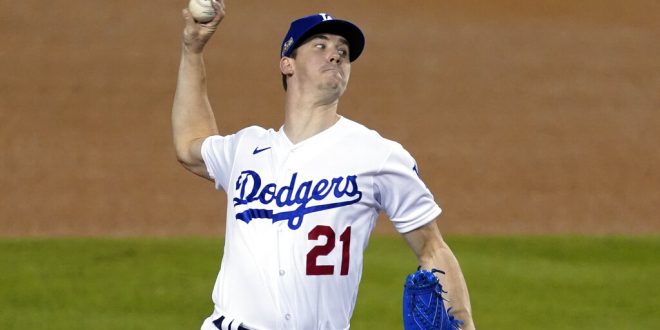 FILE - Sept. 30, 2020, Los Angeles Dodgers starting pitcher Walker Buehler throws to a Milwaukee Brewers batter during the third inning in Game 1 of a National League wild-card baseball series in Los Angeles. The San Diego Padres have already had a grand time in the new Texas ballpark, and after a lot of postseason relief are back there for another chance to overtake the Dodgers. (AP Photo/Ashley Landis, File)

Dodgers and Padres Ready for Game 1

The MLB postseason continues tonight with game one of the best of five NLDS. The Padres and the Dodgers will face off tonight after winning their respective Wild Card rounds.

The Dodgers cruised to a 2-0 series victory over the Brewers. They were able to force a shutout in game two on a 13 strikeout performance from Clayton Kershaw.

The Padres went down 0-1 to the Cardinals in their series but after a big comeback win in game two, survived to win game three and moved on. Both teams are ready for the next challenge on the path to being world champions.

The Dodgers had the best record in the regular 60-game season at 43-17. Despite their success in recent years, Los Angeles has not been able to secure a World Series win since 1988. They hope to break the “curse” this season after adding new players this year such as Mookie Betts.

Mookie Betts will have to be an essential piece to breaking the curse. In the previous series, he went 3-for-8, hitting one run, three doubles and three RBIs.

Betts addressed the media on the need to stay true to how the Dodgers play this series.

Betts had a key hit in game two of the previous series that put the game away. While the Dodgers can count on exceptional pitching, they will need to hit well to take down the Padres. The Padres have been missing their starting pitchers in the postseason.

Betts feels this does not mean the Dodgers have an advantage.

Clayton Kershaw is riding high after his huge game two performance. His success will also be key to the overall success of the team. Despite being World Series favorites, the Dodgers understand the challenge that awaits them tonight.

Run it back. #LATogether pic.twitter.com/jkTTXOSlAs

After their exciting comeback in the Wild Card round, the Padres will face their toughest challenge yet. San Diego finished in second place in their division with a record of 37-23, right behind the Dodgers.

Despite being the underdogs here, pitcher Craig Stammen believes this has been a long time coming and is excited for this next challenge.

Shortstop Fernando Tatis Jr. has the hot bat so far for the Padres this postseason. He went 5-for-11 hitting two home runs, a double with five runs and five RBIs in the previous series. He looks to continue his success tonight in game one.

The Padres have had a successful pitching duo in Mike Clevinger and Dinelson Lamet. Both have been battling injuries and have not played this postseason. Lamet will remain out for this series but Clevinger will return to the mound tonight for game one. He had 40 strikeouts in the regular season. His success will be key in slowing down the hitters for Los Angeles.

The Padres understand the challenge they have in this series but they are not scared. First baseman Eric Hosmer addressed the media on how the team feels about their opponent.

Both teams are ready for the challenge ahead. They’re both hungry, but only one moves on. Tune in to game one tonight at 9:38 p.m. ET on Fox Sports 1.