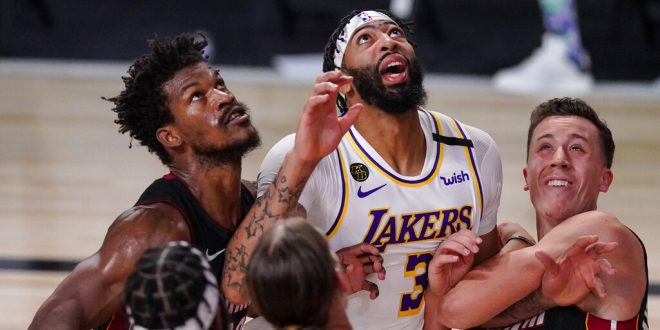 Heat Look To Even Series in NBA Finals Game 4

In the biggest moment of his career, Jimmy Butler delivered. The undermanned Miami Heat found a way back against the Los Angeles Lakers with a 115-104 win in Game 3 of the NBA Finals on Sunday night.

With a dominant performance by Butler, talks of a Lakers sweep have ceased. Butler recorded a triple-double in Game 3 with 40 points, 11 rebounds and 13 assists

Jimmy Butler is the 3rd player in NBA History to record a 40+ point triple-double in the NBA Finals, joining LeBron James in 2015 and Jerry West in 1969. pic.twitter.com/73uEtIJ6OD

Besting James in every category in Game 3 — rebounds, assists, and scoring — Butler accounted for 73 of the Heat’s 115 points, per Elias Sports Bureau. He is now tied for the second-most in an NBA Finals game in league history, trailing only Walt Frazier (74).

The Heat, once down 2-0, played with a level of desperation their opponent could not match.

Here are three things to look for in Game 4.

The return of Adebayo could mean many things for this Heat team, and another loss is not projected to be one of them.

The Heat All-Star forward has taken on a significant role for Miami throughout the playoffs. His return could make it that much harder for the Lakers to capture another victory in the wake of their Game 3 loss.

Both teams are set to tip-off from the AdventHealth Arena on Tuesday (9 p.m. ET, ABC).