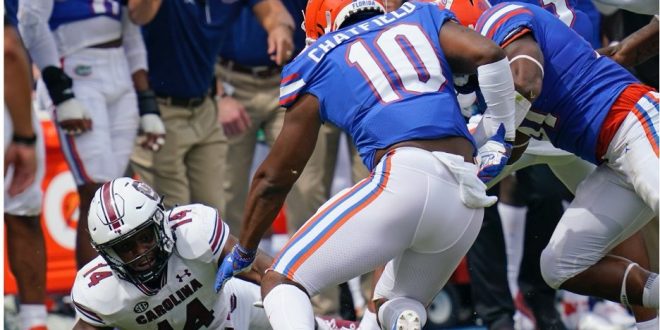 After recording a mere five total tackles last season, Gators redshirt sophomore Andrew Chatfield Jr. is relishing his chance to play significantly more snaps this year. Through the first two games, he already has three tackles including a tackle for loss. He also has this breathtaking sack against South Carolina.

Practicing alongside star defensive end Brenton Cox Jr., Chatfield calls it “fun.” The two players learn from each other and constantly seek improvement.

Practice is not the only place where Chatfield has seen improvement in his game. The edge-rusher claims he got faster this offseason thanks to getting stronger and leaner in the weight room.

Although Florida’s defense allowed a combined 59 points in the first two games, Chatfield is not too concerned about the defensive unit moving forward. He admits they to be more consistent, but the redshirt sophomore is confident given the unit’s aggressiveness thus far.

This Saturday, the Gators will travel to College Station to play the 21st ranked Texas A&M Aggies. Texas A&M is 1-1 after losing to Alabama last week, but Florida’s defense will need to contain senior quarterback Kellen Mond.

Mond threw for over 300 yards and totaled 3 touchdown passes last Saturday against a formidable Alabama defense. Chatfield noted Mond’s athleticism and his ability to create plays outside of the pocket. To combat this, Chatfield and the defense are focusing on keeping Mond in the pocket.

Still, Florida’s red-hot offense led by quarterback Kyle Trask should have no problem scoring points on a defense that allowed over 50 points last week. The Gators look to remain undefeated before returning home to play the LSU Tigers the following Saturday.

Kickoff for Saturday is set for noon in College Station on ESPN.

Hello, I am currently a junior at UF studying sports media journalism with a concentration in Political Science. I contribute web and radio content weekly for WRUF ESPN Gainesville. Be sure to check out some of my recent articles!
Previous Jaguars Look to Avoid Fourth Straight Loss, visit winless Texans
Next FHSAA Football Playoff schedule Announced