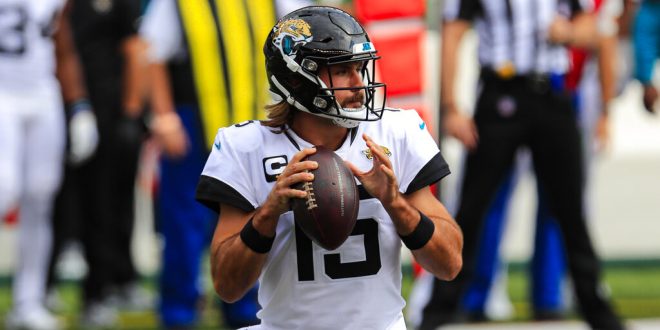 Jacksonville Jaguars quarterback Gardner Minshew (15) throws against the Cincinnati Bengals in the first half of an NFL football game in Cincinnati, Sunday, Oct. 4, 2020. (AP Photo/Aaron Doster)

The Jacksonville Jaguars are on the road again as they take on the only team below them in their division, the winless Texans in their first game without Bill O’Brien.

Who will win the battle in the trenches?

Like many football games, this one will be won or lost in the trenches. With that being said, these two teams field a couple of the poorest offensive and defensive lines in the league. Whatever team is able to get that bigger push could come out victorious this weekend.

The Jaguars are no longer the residents of “Sacksonville.” In fact, the Jaguars have one of the worst pass rushes in the league with just four sacks, tied for 29th, and just 32 QB pressures.

Although, this could be a good matchup for the Jaguars to break the ceiling. Again, the Texans have one of, if not, the worst offensive line in the league. Houston has allowed 16 sacks this season, the most in the NFL.

Jacksonville will also look to exploit Houston’s weak defensive line. Despite three-time Defensive Player of the Year J.J. Watt’s presence, the unit has been lackluster. In addition, the Texans rank 32nd in total rush defense.

The Jaguars have also been surprisingly productive in the rush attack. Despite cutting former first-round pick Leonard Fournette, James Robinson has carried the load well. Here’s what Jacksonville’s Head Coach Doug Marrone had to say about the undrafted rookie.

Quarterback play will be key

This matchup will feature two of the more exciting quarterbacks in the league. “Minshew Mania” taking on the always electrifying Deshaun Watson. For their team to come away with the win, both quarterbacks will have to make their mark on Sunday.

Minshew continues to improve week by week as he reached a season-high in passing yards last week. He’ll face a tough Houston secondary that hasn’t given up 300 yards to any quarterback this season. Despite this, Marrone had strong praise for his quarterback.

"We expect him to get better. He's a young player. He has great energy, great passion for the game."

Confidence is high in the locker room and in @GardnerMinshew5

The Jaguars don’t have a great pass rush and the same goes with their secondary. Jacksonville gave up over 500 yards of offense to Joe Burrow and the Bengals a week ago. If Watson is able to get time to create plays, the Jaguar defense could be in for a long day. This is what Maronne had to say about Watson ahead of the matchup.

In a battle of two division opponents both facing uncertainties, this game could be the first step in finding clarity. Kickoff is set for 1 p.m. this Sunday.

Sound courtesy of the Jacksonville Jaguars.