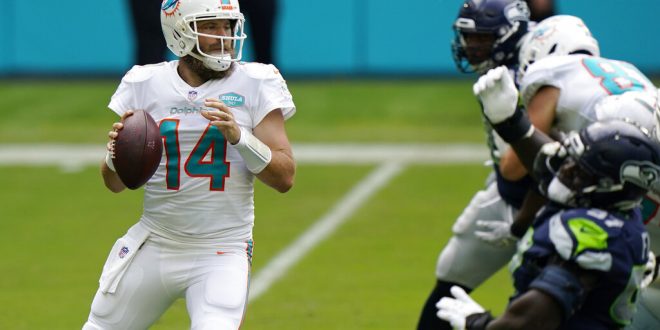 Miami Dolphins quarterback Ryan Fitzpatrick (14) looks to pass the ball during the first half of an NFL football game against the Seattle Seahawks, Sunday, Oct. 4, 2020 in Miami Gardens, Fla. (AP Photo/Wilfredo Lee)

The (1-3) Dolphins are heading to San Francisco to play the (2-2) 49ers on Sunday. While the Dolphins have the worse record, quarterback Ryan Fitzpatrick has provided to be the spark to stay competitive.

We got some business out west. #FinsUp x @Bose pic.twitter.com/NouvlNVH2n

Not many people expected the Dolphins to be good this year, especially with their first round pick, Tua Tagovailoa, sitting on the bench.

The Dolphin’s record says that many people were right. What the record doesn’t show is how close all of these games have been.

Miami lost to the Patriots, Bills and Seahawks by a combined 21 points. Considering those are some of the best teams in the league, the Dolphins should be credited with keeping it close.

Their lone win came in Week 3 after Fitzpatrick dominated the Jaguars, 31-13.  Head coach Brian Flores will have another tough opponent this week by traveling across the country to the defending NFC champions, who are not at full strength.

The 49ers have arguably suffered the most from injuries so far this season. In a year with several big name injuries around the league, San Fransisco may be in the worst shape.

While Kittle and Samuel have returned, the team is still waiting on their starting quarterback, Garopollo, to return. After practicing this week, the 49ers are hopeful that he returns Sunday.

Per Kyle Shanahan, QB Jimmy Garoppolo will return to practice on a limited basis today.

Despite the injuries, head coach Kyle Shanahan has kept his team playing at a high level. As the season goes on, his team will get healthier and 49ers could return to the dominant team they were last year.

When will the Dolphins put Tua in?

At (1-3) Miami fans may grow restless watching this team play, despite keeping it close. With every loss, the team is going to be pressured to put rookie quarterback Tagovailoa, who they selected with the fifth overall pick this past draft.

Miami is hopeful that the rookie out of Alabama is the teams’ quarterback for the long-term future. No matter how much the team struggles, it’s important to keep him sidelined until he is ready.