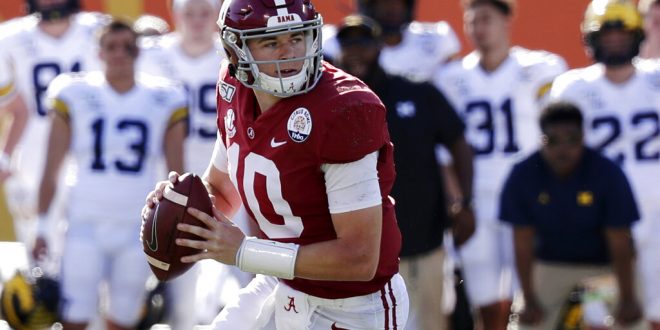 FILE - In this Jan. 1, 2020, file photo, Alabama quarterback Mac Jones (10) rolls ut as he looks for a receiver during the first half of the Citrus Bowl NCAA college football game against Michigan in Orlando, Fla. No. 2 Alabama doesn’t look like a team that lost quarterback Tua Tagovailoa and two first-round receivers. Mac Jones still has a selection of some of the SEC’s best playmakers, including Jaylen Waddle. (AP Photo/John Raoux, File)

Alabama comes into the third week of SEC football (2-0) for the season. Prior to this match up against Ole Miss, the Crimson Tide faced off against Texas A&M taking a 52-24 win over the Aggies.

Quarterback Mac Jones, the leader of the offense, had an impressive game against the Aggies, going for a career-high passing of 435 yards and four touchdowns. Mac Jones is fourth in the SEC for passing yards with 684.

Last season these two SEC teams met in Alabama where the Tide took a 59-31 win over the Rebels. Head coach Nick Saban who in charge of this Tide team as quite a rivalry on his being that this maybe an anticipated match up between these two teams.

This Ole Miss Rebel team is still trying to find a feel. The Rebels’ defense comes into this game with an impressive one point win against the Kentucky Wildcats 42-41.

Matt Corral having one heck of a start to his season had an impressive game throwing four touchdowns, throwing 24-of-29 passing completions for 320 yards. Corral lands him self second in the SEC for passing yards with 715 for the season.

Ole Miss is second in the SEC for passing offense and number one for passings yards. Wide receiver Elijah Moore leads the SEC in receiving yards per game having 319 yard for the season so far.

Ole Miss is under new coaching staff  lead by head coach Lane Kiffin who is in his first year with the Rebels.

Prior to this head coaching position Kiffin was once apart of the Alabama football program as an assistant coach for Saban. He helped coach Alabama for three years seeing over the quarterback position before taking over the head coaching job at Florida Atlantic, and then landing himself at Ole Miss.

Kick off for this SEC football match up is set for tomorrow at 730 P.M in Oxford, Mississippi.