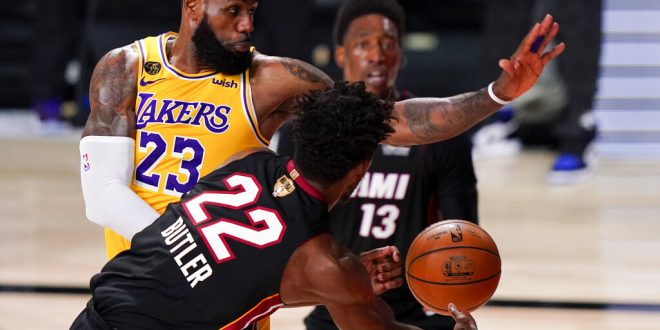 The Los Angeles Lakers will face the Miami Heat for Game 5 of the NBA Finals. Los Angeles will look to capitalize on their 3-1 series advantage and take the last step in earning the franchise their seventeenth NBA championship.

The Lakers last championship win was 10 years ago when the late Kobe Bryant led the team to victory over the Boston Celtics in seven games. A title this year would tie Boston for the most by a franchise in NBA history.

Los Angeles will wear their Mamba jerseys for Game 5 tonight. The Lakers, who wear the jersey in memory of Kobe Bryant, have an unbeaten 4-0 record when wearing the black and yellow uniforms.

Lakers have opted to wear their Black Mamba jerseys for Game 5 of the #NBAFinals, per @ByTimReynolds

LAL is undefeated when they wear them pic.twitter.com/V0caT6ORI9

As the Lakers close in on title 17, LeBron James realizes that his championship resume with the Cleveland Cavaliers and Miami Heat doesn’t matter to Los Angeles fans.

James has won three previous championships in his career. He won two with Miami in 2012 and 2013 and added another with his hometown Cavaliers in 2016. James looks to join Robert Horry and John Salley as the only players in NBA history to have won a championship with three franchises.

James’ play is a large reason why his team is just one win away from entering the NBA history books. During the finals, he has averaged about 28 points, 11 rebounds and eight assists playing 38 minutes a game. It is only the second time James has averaged less than 40 minutes during a Finals series.

A strong performance from teammate Anthony Davis has certainly made James’ job easier. Davis is averaging 28 points, nine rebounds and three assists per game throughout the playoffs. Together, James and Davis score about 60 points a game and have helped Lakers to outscore opponents by an average of seven points per contest.

James will be playing to earn his fourth career championship against his former team tonight.

Tonight, the Heat will look to repeat their strong Game 3 performance where they walked away with a 115 to 104 victory. In the win, Jimmy Butler had an impressive performance putting up 40 points, 13 assists and 11 rebounds.

Butler is confident in his team’s ability to extend the series to six games.

One factor that has continued to plague Miami this series in injuries. Both starter Goran Dragic and all-star Bam Adebayo left the Game 1 with injuries and would miss Games 3 and 4. Adebayo returned in Game 4 with limited minutes. Dragic has yet to return and is listed as “doubtful” on the injury report for tonight’s Game 5 matchup.

Audio in this Article is Courtesy of abcnewscall.com