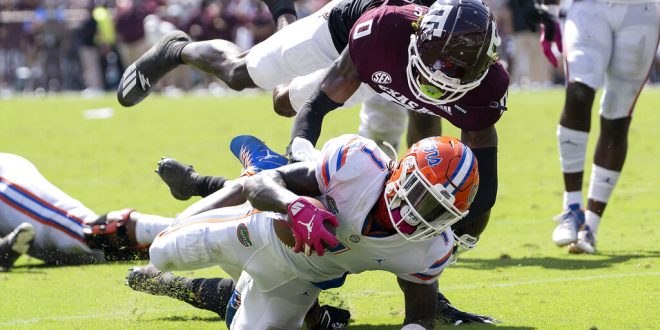 It was another rough defensive outing for the No. 4 Florida Gators as they acquired their first loss of the season. The Texas A&M Aggies rebounded with a 41-38 win over the Gators and a huge offensive outing.

It was a battle of who can hold the ball last, as two strong offenses shined and neither defense was at its best.

However, Florida Head Coach Dan Mullen knew this full SEC Schedule was going to be tough this year, and would be filled with games like this one.

Nobody stood out more today than Texas A&M’s Isiah Spiller. Spiller ran through the Florida defense as if they were not even there. He had 27 carries for 174 yards and two touchdowns. In fact, Kellan Mond and Spiller accounted for 515 of their team’s 543 yards.

On the receiving end for Texas A&M, Caleb Chapman excelled. Chapman racked up 151 yards and two touchdowns with an average of 16.8 yards a catch.

Mullen also gave credit to the rest of the Aggie’s electric offense.

And while the Florida defense will be the big story from this game, Kadarius Toney continued his great start to the 2020 season. Toney ended the game with 92 yards and two touchdowns for an average of 13.1 yards per catch.

The Kyle duo got going fast for the Gators, earning the first touchdown of the game, putting the Gators up 7-0. However, the first half turned into a back and forth game between the teams.

Texas A&M went on to score a follow-up touchdown off a Mond pass to Chase Lane. Florida scored two more touchdowns in the half and the Aggies picked up an additional touchdown and a field goal, making the score at 21-17 at the half.

The second half started with some less than spectacular defense from both sides. However, Florida was able to pull it together enough to force the first punt of the game.

On the Gators’ first possession of the half, the team almost found themselves in trouble after Trask threw into double-coverage and Leon O’Neal grabbed the interception. However, a personal foul was called on Micheal Clemons for hands to the face.

That personal foul allowed the Gators to score again and go up 28-17. The Aggies would get their revenge though on the next drive. In 10 plays, nine of which were rushing, Texas A&M scored another touchdown to close the gap to four.

However, Florida was able to tie up the game on an Evan McPherson 53-yard field goal. The field goal attempt was originally at 43-yards but after two Florida penalties, the ball was moved back.

Things began to lookup for the Gators though after the Aggies fumbled the ball and the Gators were able to recover. Toney continued to put on a show with two big runs that led to another Florida touchdown. Texas A&M tied it back up at 38 soon after though with a Mond 51 yard touchdown pass.

On just the third play of the next possession though, the Aggies knocked the ball from Malik Davis’ hands for a fumble. Texas A&M ran down the clock to just two seconds and the Aggies made a last-second field goal to win the game.

The defensive woes for Florida continued into this week. The Gators gave up 543 yards of offense to the Aggies, allowing Mond to throw for 338 yards and three touchdowns. Spiller also ran for 174 yards and two touchdowns.

The Texas A&M offense quite literally ran through the Florida defense with 205 rushing yards to the Gators’ 90. The Aggies also averaged 7.3 yards per snap.

While this loss will sting, Mullen says there is not much time to dwell on it.

The Gators will return home next weekend to face off against No. 17 LSU. The Tigers just dropped their second game of the season to an unranked team in Missouri. Kickoff is set for 3:30 on ESPN.