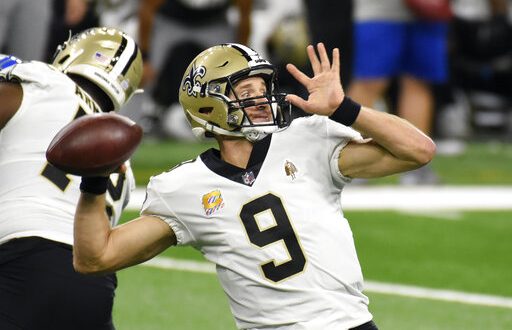 The Saints are the favorite to win, having about a 78 percent chance to win.

The quarterback matchup between veteran Drew Brees and rookie Justin Herbert is surely one to watch.

Brees has been in the league since 2001 being originally drafted by the Chargers until going to the Saints in 2006. He stands at No. 7 in total quarterback rating this season while Herbert is at No. 15.

He has 17 300-yard passing games and 6 games with 4 Pass TD on MNF, both most in series history. pic.twitter.com/KmgvZyGBSC

Brees called Herbert talented and versatile after watching him play these past few weeks.

Herbert got an unexpected start in Week 2 after Tyrod Taylor suffered a chest injury before the game. He has started every game since then, and has recently been promoted to starter for the rest of the season by coach Anthony Lynn.

Herbert makes history being the first rookie quarterback to go up against three Super Bowl MVP quarterbacks in three of his first four games as a starter.

He is excited to go up against Brees and the Saints who he watched growing up.

Injuries continue to affect the NFL including both the Saints and the Chargers.

The Chargers lost a big part of their offense with running back Austin Ekeler.

Ekeler suffered a hamstring injury during last week’s game against the Tampa Bay Buccaneers. The running back may miss four to six weeks due to the injury.

Wide receiver Mike Williams also has a Hamstring injury, but is listed as questionable going into the Monday night game.

On the defensive side, star pass rusher Joey Bosa is also questionable due to triceps, knee and ankle problems.

For the Saints, tight end Jared Cook is questionable for the game with a groin injury.

The Saints’ star wide receiver, Michael Thomas, has an ankle injury but will not play due to team reasons.

Michael Thomas was in an altercation with a teammate at practice this weekend. Saints have decided to sit him for Monday’s game, per @AdamSchefter pic.twitter.com/X87tCZUZ08

He only has three catches for 17 yards this season.

The Saints have other countless injuries on the defensive side, including cornerbacks Janoris Jenkins and Marshon Lattimore.

Brees talked about how the lack of a pre-season may be a factor for many of the injuries this season.

Things to look for

With Ekeler out, the Chargers will not only rely on their rookie quarterback but also their rookie running back Joshua Kelley.

This contrasts the Saints who have their star running back Alvin Kamara.

Chargers’ coach Anthony Lynn talked about how difficult it is to defend Kamara.

Lynn also talked about how he is excited to play against his friend, the Saints’ head coach, Sean Payton.

However, ultimately Lynn wants to take his second win of the season.