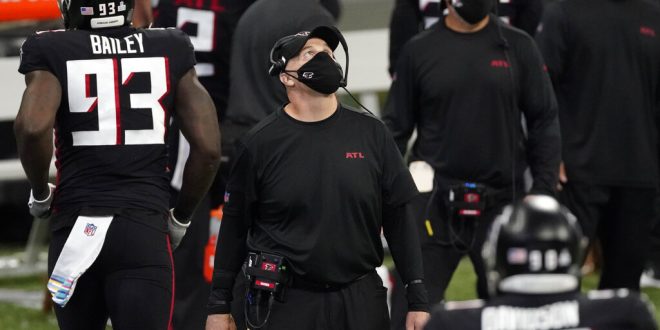 Atlanta Falcons head coach Dan Quinn looks at the scoreboard after a Carolina Panthers field goal during the second half of an NFL football game, Sunday, Oct. 11, 2020, in Atlanta. (AP Photo/John Bazemore)

Following a 23-16 home defeat against the Carolina Panthers on Sunday, the Atlanta Falcons announced that they have fired head coach Dan Quinn and general manager Thomas Dimitroff.

The Falcons fell to 0-5 and felt they had no choice but to let go of the defensive-minded Quinn. Under Quinn, the team gave up the second most yards in the league through the first five games.

Quinn finished his tenure with Atlanta after posting a 46-44 record through six seasons, including a Super Bowl run in 2016. For the first time as a head coach, Quinn’s defense ranked in the bottom five in both yards allowed and points scored.

Through the first five games, the Falcons allowed 32.2 points and gave up 446 yards per game. Prior to this season, Quinn’s defenses hadn’t given up more than 380 yards and 27 points in any season.

In 2017, the Falcons ranked in the top ten in both points and yards allowed. That mark has not been met in the years since. Falcons’ owner Arthur Blank expects more from his team. “Clearly, the results on the field this year, and more broadly over the last 3+ seasons, have not met our expectations or yours,” Blank said in a statement released Sunday.

What’s Next for the Former Gator?

The Gators have yet to enter the top five in either category in any year since. With Florida’s defense struggling mightily this season, and the fanbase, and some former players, unhappy with the performance of current defensive coordinator Todd Grantham, one would have to wonder if a return to Gainesville for Quinn could make sense.

Why Dan Quinn Makes Sense with the Gators

Despite having one of the league’s worst defenses this season in Atlanta, Quinn is still a tremendous defensive mind who has decades of experience. In 2013 and 2014, as the defensive coordinator in Seattle, Quinn’s Seahawks had the number one defense in the league both seasons. They gave up under 16 points and 275 yards a game.

The Seahawks made the Super Bowl both years and won once. As a head coach, Quinn struggled to repeat his success, but strictly as a coordinator, Quinn was consistently one of the best in all of football. Expect plenty of NFL teams to have interest in Quinn’s services, but if the Gators do make a move from Grantham, a return to the Gators could be an excellent landing spot for the former Falcon head man.

Will Levenson is a Journalism and Sports Media major at UF. He produces daily shows for WRUF, including "Sport Scene with Steve Russell," "Harp on Sports," and "The Tailgate." In addition, Will provides weekly sports updates for WUFT News and radio Sportscenters for WRUF radio. Will has been a writer at ESPN Gainesville since September 2019.
@BigWillLevenson
Previous ‘We’ll Be Back’: Heat Vow to Return to NBA Finals After Loss
Next Mullen, Gators learning from loss, “preparing for LSU”