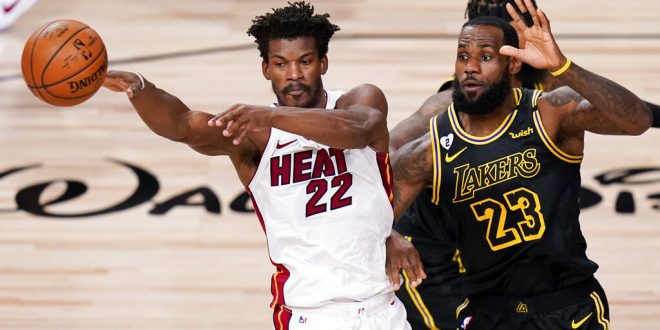 With their 106-93 victory over the Miami Heat, the Lakers took home their 17th NBA title. However, this isn’t the last time you’ll see Miami reach the finals according to Jimmy Butler.

The Heat forward vowed after the game that the team would be back.

Road to the Finals

Of course, for the Heat to lose the NBA Finals, they had to make it there.

The Heat finished the regular season with a 44-29 record. After winning the Southeast Division, they won four straight against the Indiana Pacers in the first round of the conference finals.

From there, they faced the Milwaukee Bucks in the conference semifinals. The Heat won the first three games of the series before losing Game 4 in overtime. However, they would finish the series strong, defeating the Bucks 103-94 in Game 5.

Next it was on to the conference finals. Miami squared off against a Boston Celtics team that had emerged from the semifinals with a 4-3 record over the Toronto Raptors. The Celtics would give Miami some trouble.

Now, only the Los Angeles Lakers stood in the way of an NBA title.

To take home the trophy, the Heat would have to find a way around LeBron James and Anthony Davis. The pair dominated on the hardwood, often leading the team in points scored and assists.

In the finals, the duo was too dynamic to be stopped. Even in the Lakers Game 5 loss, James scored 40 points.

Butler carried the Heat offensively. In the first five games of the finals, he averaged 29 points, 10.2 assists and 8.6 rebounds, according to the New York Post.

Jimmy Butler currently has 48 clutch points in the 2020 Playoffs. The only players with more in a single postseason this decade are Kawhi Leonard (58 in 2019) and Dirk Nowitzki (66 in 2011).

Ordinarily, guard Goran Dragic would’ve been on the court with him. But he injured his foot early in the series and only played 18 minutes in Game 6.

After the game, Dragic was asked about his pain level.

He questioned whether the reporter was talking about physical pain or the pain of losing the finals and reiterated Butler’s point.

“Which pain? Now, right now or [the foot]?…. “It’s not easy when you make The Finals and you lose it, but try to get to one next year. Try to remember those hard moments, the feeling I’m feeling right now, and try to use that to try to get better for the next year.”

For the Butler and the Heat, the focus is on next year.