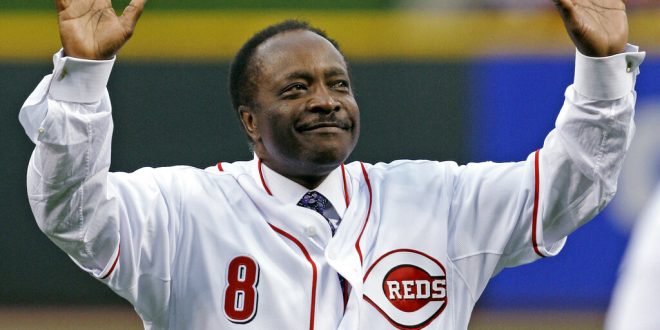 FILE - In this Wednesday, April 7, 2010, file photo, Cincinnati Reds Hall of Fame second baseman Joe Morgan acknowledges the crowd after throwing out a ceremonial first pitch prior to the Reds' baseball game against the St. Louis Cardinals, in Cincinnati. Hall of Fame second baseman Joe Morgan has died. A family spokesman says he died at his home Sunday, Oct. 11, 2020, in Danville, California. (AP Photo/Al Behrman)

Hall of Famer Joe Morgan passes away at 77

Legendary second baseman Joe Morgan passed away Monday at the age of 77.

He was found dead in his home in Danville, California. Morgan suffered from nerve damage known as polyneuropathy. He was also diagnosed with bone cancer in 2015 that required a bone marrow transplant from his daughter Angela.

Morgan played 22 seasons in the MLB with the Houston Astros, Cincinnati Reds, San Francisco Giants, Philadelphia Phillies and Oakland Athletics. After his playing career, Morgan spent over 25 years as a broadcaster.

Morgan is most known for his time in Cincinnati with the Reds. In eight seasons with Cincinnati, Morgan was an All-Star every season and won two National League MVP awards, five Gold Gloves and two World Series titles.

The Reds are heartbroken to learn of the passing of baseball legend Joe Morgan. pic.twitter.com/zBoQ2gHZys

Morgan broke into the league with Houston in 1963 at the age of 19. He spent 10 seasons in Houston, hitting .261 with 72 home runs and 327 RBIs. Morgan was then traded to the Reds in a blockbuster trade involving eight players.

Hall of Fame second baseman Joe Morgan has died at the age of 77.

Morgan was a 10-time All-Star and is one of two Reds players to win multiple MVP awards, along with Johnny Bench.

He won consecutive World Series championships in 1975 and 1976. pic.twitter.com/5uCPYuazcv

Morgan spent the last five seasons of his career with four different teams. In 1982, at the age of 38, he won an NL Silver Slugger with the Giants as the best offensive second baseman in the NL. Then, he retired after 22 seasons in 1984 at the age of 41.

One of the all-time greats

At the plate, Morgan drew lots of walks. He led the league in on-base percentage four times and walks four times as well. Once on base, Morgan made opposing teams pay. He stole nearly 700 bases over the course of his career. Morgan was inducted into the Baseball Hall of Fame in 1990. The Reds retired his No. 8 jersey.

The Reds' blockbuster trade for Joe Morgan was one of the greatest in the sport's history. In eight years with Cincinnati, he had an Adjusted OPS+ of 147 – a .415 OBP, 816 runs, 406 SB, 2 MVP Awards, 5 Gold Glove Awards. What an amazing player he was.

Previous Humble Halfback: Nay’Quan Wright Making Most of Opportunity
Next Former Gator Harrison Bader Reflects on Season with the Cardinals