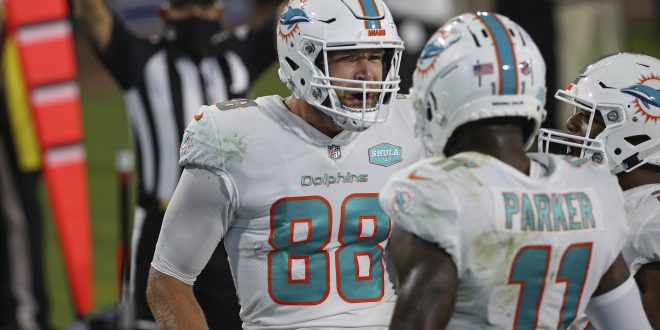 Miami Dolphins tight end Mike Gesicki celebrates with teammates including wide receiver DeVante Parker (11) after scoring a touchdown on a 15-yard pass play against the Jacksonville Jaguars during the first half of an NFL football game, Thursday, Sept. 24, 2020, in Jacksonville, Fla. (AP Photo/Stephen B. Morton)

Jets’ head coach Adam Gase is on the hot seat and quarterback Sam Darnold is nursing a shoulder injury. New York is also paying Le’Veon Bell to go play for the Chiefs. It can’t get much worse for the 0-5 Jets as they travel to Miami to play the Dolphins (2-3), who just dismantled the reigning NFC champion 49ers last Sunday.

Coaching change looming for the Jets?

If the Jets lose on Sunday, they will be 0-6 with no sign of improving in the near future. Offensive minded head coach Adam Gase has his team scoring a league-low 15 points per game.

His already depleted roster will have another barrier to overcome after the release of Le’Veon Bell. The star running back has struggled in this offensive system and grew frustrated. New York cut him this week and he has since joined the Kansas City Chiefs.

A lot will be put on quarterback Joe Flacco to elevate this team and to keep Gase’s job. Flacco may be without Mekhi Becton, the impressive rookie tackle, who missed practice on Wednesday due to a shoulder injury.

Another lackluster performance could put an end to Gase’s time as the Jets’ head coach.

The Dolphins may be 2-3, but the excitement around the organization is much higher. The Dolphins’ roster is not great on paper and certainly not supposed to blow out a team like San Francisco 43-17. Yet, week after week, the Dolphins find themselves staying in each game.

Veteran quarterback Ryan Fitzpatrick has been playing at a high level so far and has this team and fans believing.

Last week he threw for 350 yards and 3 touchdowns. With performances like that, it is no surprise that Miami is playing at this level.

I like that touchdown. That is a nice touchdown. pic.twitter.com/xdPyniQtGE

Miami is the home team for Sunday, Oct. 18. They are nine-point favorites over the Jets.