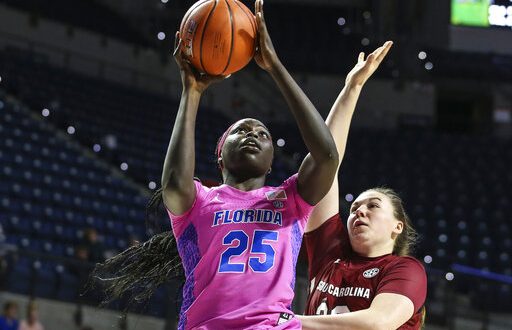 Dut is looking to build off a freshman season that saw her average 2.2 PPG, 1.4 RPG and .2 APG. A former three-star prospect, at 6’4 the Vancouver native looks to reek havoc on the boards.  During quarantine, Dut trained for the upcoming season. Looking to add a new dimension to her game, she discussed the potential growth of her three-point shot.

Last season, the Gators went 15-15 during the regular season, with a loss to LSU in the first round of the SEC Tournament. Head Coach Cam Newbauer returns 10 players from last season, with half of those being upperclassmen. The experienced group adds three freshmen, all of which Dut had praise for.

This season, Dut has big shoes to fill. Last year, Redshirt Senior Zada Williams posted the highest field goal percentage in program history at 60.2%. With Williams’ using up her eligibility, Dut looks to fill the hole left at the forward position. Dut talks about her mindset for the upcoming season below.

While the 2020-2021 schedule has not been released yet, all gears are shifting towards the upcoming season as the Gators look to improve on last season.

Sam Petosa is a Journalism major pursuing a Specialization in Sports and Media at UF. The South Florida native produces daily shows for WRUF, including "Sport Scene with Steve Russell, and "The Tailgate." In addition, Sam provides weekly sports updates for WUFT News and radio Sportscenter's for WRUF radio. Sam has been a writer at ESPN Gainesville since January 2020.
@sampetosa5
Previous Winless NY Jets are a Long Way from Taking Off
Next Former Gator LAX Star Pirreca Invited to Tryouts for U.S. National Team