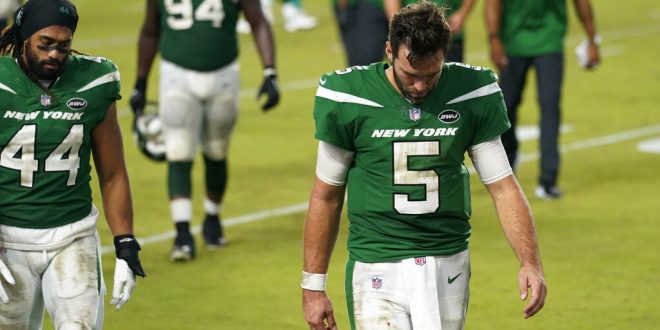 New York Jets quarterback Joe Flacco (5) and linebacker Harvey Langi (44) walk off the field during the end of an NFL football game against the Miami Dolphins, Sunday, Oct. 18, 2020, in Miami Gardens, Fla. The Dolphins defeated the Jets 24-0. (AP Photo/Lynne Sladky)

They could be the worst team in NFL history. The most historic tank job of all-time. They’re built to lose.

Oh, that’s not about the Jets. Such commentary was used to describe the atrocity that was the 2019 Miami Dolphins — the same team that shut out the Jets on Sunday on their way to a 24-0 victory.

To give credit where it’s due, the Dolphins are a much-improved bunch from last season’s roster that started off the 2019 season 0-7. The 0-6 Jets, on the other hand, are just a game away from matching that pace and there’s a strong likelihood it gets much uglier than that.

I have watched a lot of bad football in my life. I’ve never seen a team as bad as the 2020 New York #Jets. There isn’t anything they do well. They are unprepared, undisciplined, and look like they absolutely hate playing. If ownership isn’t embarrassed by this they never will be.

It’s no secret the New York Jets are bad.

Last game, Joe Flacco missed more passes than he made. Frank Gore, for reasons not known, is still running a football. He did so again on Sunday en route to a blistering 46 yards. The defense allowed a 21-0 deficit going into the half. The list goes on.

The Jets inefficiencies have been well documented, but it could be time to look at more than just the player personnel on the field.

Hot Seat In The Cockpit (it may already be on fire)

The man leading the cause in New York has been 5th-year head coach Adam Gase. Gase, in his second year as head coach of the Jets, has led the team to — well nothing so far in 2020.

Gase has taken his fair share of the criticism that has surrounded the fledgling Jets franchise. After all, it is the head coach of a team that sets the tone of play (or lack thereof).

After the loss, Gase said the team’s success will be dependent on getting their younger players more involved.

But do the Jets really want Gase out of town?

Getting those younger, more inexperienced players further involved could mean making the prospects of a sparkly #1 overall pick glean brighter and brighter with every passing Jets loss. Keeping Gase around and further permeating toxicity into the Jets franchise could help them get closer to that reality. It’s at least a better game plan than whichever one is being employed right now on the field.

Word of advice to the New York Jets, if you want Trevor Lawrence you have to keep Adam Gase pic.twitter.com/4bQLnCERSe

Securing the #1 overall pick could result in bringing in Clemson superstar QB Trevor Lawrence, who has the talent to immediately insert himself as a franchise QB on any NFL roster.

Even with the #1 pick insight and possibly being the “goal” of the season, the Jets still have a lot to figure out and their next chance to do that will be against the Bills on Sunday.

Righting the ship on game day could take shape in two forms:

2) Another loss and another step closer to the #1 overall pick.

So with either result on Sunday, for the first time this season, it may feel like a win/win for the New York Jets.