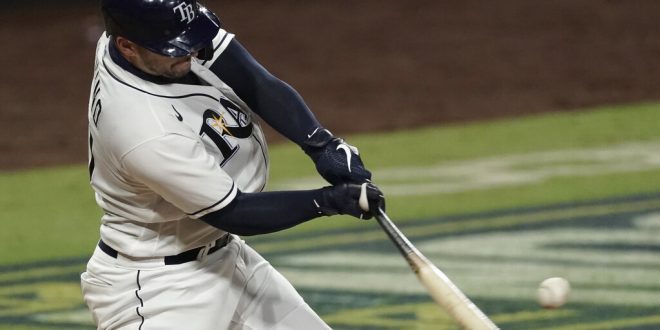 As many Gator fans watch the World Series, a familiar face is making major plays for the Tampa Bay Rays. Mike Zunino continues to be an influential player on the diamond, just as he was at the University of Florida. Zunino is the sole player in the World Series representing the Gators.

Drafted back in 2012, Zunino spent the first six years of his professional career with the Seattle Mariners. Zunino’s power, both behind the plate and when batting, has defined his eight years in the professional league. Zunino has made major plays during this post-season helping the Rays reach the World Series.

Back at the University of Florida, Zunino led an impressive college career. As the first Gator catcher nominated twice for first-team all American, he helped the Gators reach a top-three-year performance with a record of 147-56 for the three years he played for the Gators.

Overall, he was exceptional both offensively and defensively. During his three-year college career, he batted an average of .327 in 193 games and committed just eight errors out of 1,473 chances.

Zunino Stepped Up for Rays Post-Season

The same power he showed during his college career has shined during this 2020 postseason. Zunino has been essential to helping the Rays reach the World Series this season.

This season, Zunino has batted an average of .147. Even though his batting average is not as high as many desire, he has made influential plays during his first postseason as a power-hitter.

Before this postseason, the former Gator had not made many appearances on the field for the Rays when compared to others. He appeared in 90 games during the 2019 season and played in 28 games during this shortened 2020 season. Nevertheless, Zunino has made major contributions during the first postseason appearance of his career.

The Rays will play the  Dodgers in game two of the 2020 World Series, Wednesday at 8 p.m. The Dodgers secured the game one victory with a score of 8-3 over the Rays.