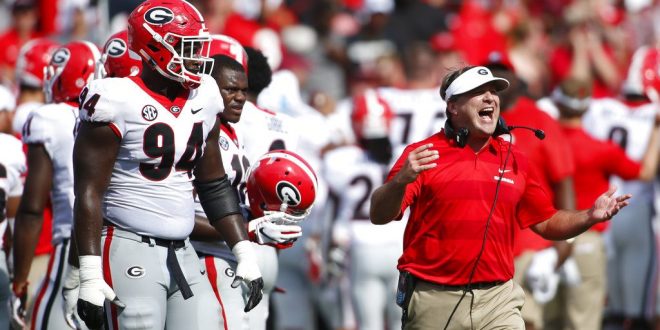 Georgia coach Kirby Smart argues a call with the ref during the first half of an NCAA college football game against South Carolina, Saturday, Sept. 8, 2018, in Columbia, S.C. (Joshua L. Jones/Athens Banner-Herald via AP)

UGA Looks to Clean Up Mistakes Over Bye Week

After falling to the Crimson Tide in a 17-point loss, the Georgia Bulldogs plan to fix their mistakes over the bye week. Georgia looks to bounce back in their week-nine matchup versus the Kentucky Wildcats.

During Georgia’s 41-24 defeat to Alabama, Saturday evening, Bulldogs quarterback Stetson Bennett managed to throw three interceptions on crucial drives. Contrarily, Bama quarterback Mac Jones committed one turnover which was a pick early on, despite passing for over 400 yards.

However, Head Coach Kirby Smart came to his quarterback’s defense with this statement:

“He made a couple of bonehead mistakes (earlier) in the game and got away with them, but some of them (interceptions) weren’t his fault… he had a batted ball that was a pick, he had a ball that I don’t know for sure, but I thought Jermaine should have caught. It went up Jermaine’s hands a little bit, and they picked it off.”

Although, is this throw Bennett made across his body to the opposite side of the field really defendable?

Not sure what Stetson Bennett saw here on this interception pic.twitter.com/LreueYOCyw

As the great Peyton Manning would say, that was a DUCK. He might as well have attempted the Patrick Mahomes no-look pass and thrown it with his eyes covered.

Everyone knows that you have a slim chance to win a football game when you’re constantly turning the ball over. Georgia gave up key possessions by QB Stetson Bennett forcing the ball to his receivers. It will be essential for Bennett’s development to use this time off to improve his turnover issues in order to protect the football moving forward.

Dawgs are Fired Up

UGA Head coach Kirby Smart mentioned during an SEC coaches press conference how his team is energized and ready to pounce their way back into the win column versus Kentucky next Saturday.

Smart added how his team is having a terrific week of practice and his players continue to compete with one another at a high-level.

The Bulldogs travel to Lexington in week 9 to face the Kentucky Wildcats on the road. The battle will kickoff on SEC Network at noon. Kentucky is coming off of a dominating 34-7 victory over Tennessee, and look to carry that momentum into their duel with the Dawgs. Georgia hopes to jump back into the race with the top-three teams in the nation after dropping to No. 4 in the AP poll following their devastating loss to Alabama.

UGA looks to get what should be an easy win over Kentucky before playing their biggest game of the year against the Florida Gators. Both schools head into the rivalry-matchup looking to clinch the SEC East title and secure a date to the SEC Championship game.

Angel is a student at the University of Florida. She is a Multimedia Journalist who is currently a Sports Reporter and Writer at ESPN Gainesville. Follow her on Twitter (@angelcwells) and Instagram (@angel_wells). Be sure to follow her NFL Twitter account to stay up to date with the latest NFL news. (@UpToDate1NFL)
@angelcwells
Previous Gators’ Operations Remain Halted
Next Mike White talks upcoming season