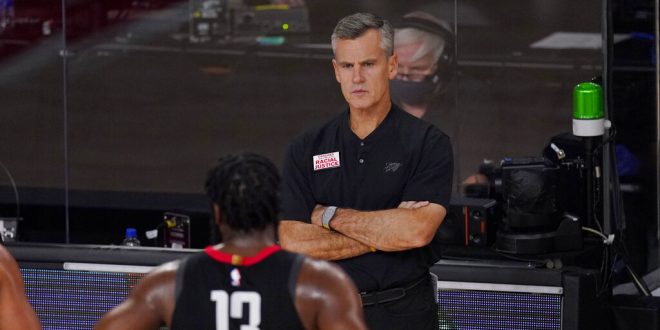 Billy Donovan has agreed to a deal to become the next coach of the Chicago Bulls, sources tell ESPN.

Over the last five seasons with the Oklahoma City Thunder, Donovan accumulated a 243-157 record. Donovan now looks to lead the Bulls to their first playoff appearance in four years. Prior to leaving for the NBA, Donovan spent two decades in Gainesville as the head coach of the Florida Gators. There, he reached four final fours and won back-to-back national championships.

In an interview with Steve Russell on WRUF’s Sportscene, Donovan said he “learned a lot” during the transition from college to the pros. He even called the NBA a “different game.”

“I have a much better understanding of the NBA now than I did coming out of college,” Donovan added.

After spending nearly 60 days in the Orlando bubble, Donovan credits the NBA for doing an “unbelievable job.”

Donovan called the bubble a “really really safe environment,” albeit restrictive. “It was amazing to me that no one tested positive,” Donovan noted.

Donovan also mentioned the tremendous effort by Chris Paul, the players’ association president, in “getting everybody on board to get to back playing.” “Chris [Paul] was in intimate conversations with Adam Silver and with the league office about how to go about doing this and how to make it happen,” Donovan said.

Given the news surrounding the virus and social injustice at the time, Donovan felt the league had a “platform and an opportunity to have sports come back to our country and use it as a way to bring the country closer together.”

As for the teams who missed the playoffs like the Bulls, the NBA gave them the opportunity to have their own bubble at their own facilities. In the end, “to crown a champion this year,” according to Donovan, was a “great testament to Adam Silver and to Chris Paul and to the players.”

Future of the Bulls

Similar to when he first arrived at UF, Donovan admits there is a lot of work ahead of the Bulls. Donovan has met the players, but says adjusting to covid “can be challenging, especially taking over in a new job.”

Nonetheless, Donovan is excited to take on the challenge and “help build the Bulls back.”

Hello! I am a sophomore at UF studying journalism sports & media. I help contribute radio and website content for ESPN Gainesville. Additionally, I am a sports writer for The Independent Florida Alligator and help cover the UF women's basketball team. I am also the UF softball beat reporter for ChompTalk.com.
Previous Gator Baseball Begins Fall Practice
Next Local High School Matchups in the Gainesville Area